All Play and No Work!

We have had a lovely couple of days here with warm weather and great company. Amanda and Kathryn (both lovers of all things black) came to visit yesterday. Kathryn, who has a lovely black herd (www.neroblackalpaca.co.uk) did note that thing were still looking rather pale around here. Fair comment but our black boy; Black Sabbath will be doing his magic sometime soon. It was down the village for a pub lunch and a glass of wine before having a look at a fleece or two. Everyone was very well behaved with the exception of Camilla, but then she doesn't even want to be looked at never mind her tummy felt. I am glad to say that Kathryn also thinks that there is a cria in there!

As my efforts to supply treats in the form of a water sprinkler were rejected earlier in the week I thought that I would try again. This time it was miniature carrots nicely prepared and straight out of the fridge (I know; It's no wonder Paul keeps tutting). This was met with much more appreciation. Pebbles downed hers whole: 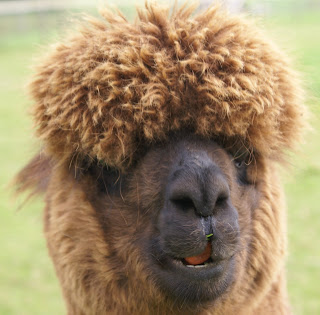 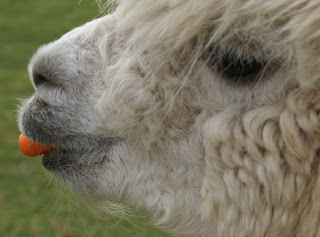 Which unfortunately didn't appear to be very successful: 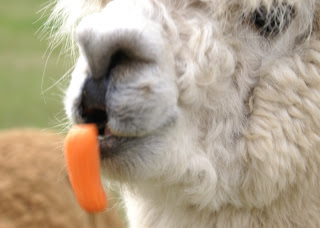 As if ice cool carrots were not enough, Katkin has taken to hogging the water trough since the weather has improved. Things really began to hot up today when Holly decided that she wanted to use the same trough, despite other options being available. In the end a compromise was reached; Holly managed to access the water in the next field, but via 'Katkin's trough' !! I have to say I think Holly was looking a bit intimidated but who wouldn't be: 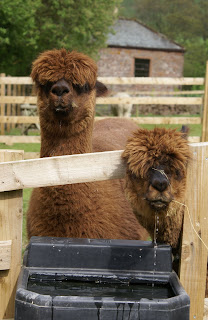 Katkin: Minder of the water trough!
Posted by Unknown at 17:27