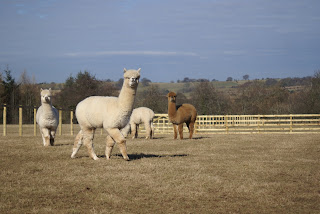 I have had to endure some very adolescent behaviour from the young boys this week. It has however kept me very entertained. Last weekend I moved Hollywood and chums into a new paddock (behind them in the photo) as it had more grass for them. However, on Monday, whilst I was trying to get through the gate with the quad they managed to escape back in to their old paddock. I did manage to get them chased back fairly easily but despite a number of distraction tactics they escaped again on my exit. This had obviously been preplanned (I saw them heads together in the shelter) as before I had even managed to get off the bike they had pronked around their old paddock then rushed back to their new one! The same behaviour was repeated on Wednesday. Not to beaten I have managed to get the better of them today. They are now back in their old paddock looking forlornly at the lovely grass on the other side of the fence! That will teach them. In the meantime, Paul is putting a gate on the field shelter in the new paddock so that I can lock them in their rooms when they are naughty! Do you think that spring is in the grass?

On a serious note we have had the vet out today to see Hoity Toity. She is the girl who aborted at five months gestation in January. Despite extensive tests we never found any probable cause and put it down to stress (she was new to us at this point). However, we have struggled with her weight despite extra rations of : Carrs mix, sugar beet and oats, Fast Track, as well as Camelibra. She has also had vitamin and mineral supplements and some Jump Start. We have tested for every parasite we know of. All negative. She has a good appetite, no teeth issues and we feed her seperately. She has no diarrohea and is apyrexial. The vet gave her a Vit B12 shot in case of anaemia and is doing some more blood tests. Her heart and lungs passed the MOT test so it is a bit of a mystery. A gastric ulcer may be a possibility I suppose but the vet was not keen to treat this undiagnoised. We will have to wait until Monday to see if anything shows up in the blood results. In the meantime she has had peas and beans added to her rations for extra protein. I hope that I am worrying for nothing but I would rather play safe.
Posted by Unknown at 16:54