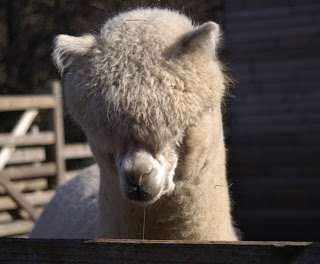 After yesterday's dismal results in the photography department I decided that a different approach was being called for. Mark obviously had the right idea with his new trailer, but it's a lot of work to go to in order to get a good photo!
As you can see by the picture of Hollywood (head straight out of the water trough) the means to get their attention actually arrived at my door early this morning. I actually managed to get all four boys in the photo at the same time and all facing the same direction. Okay maybe the legs could have been better positioned and Hollywood isn't looking quite so macho, but hey!
See below: 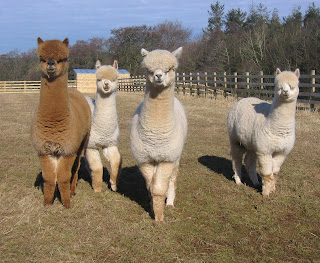 From left: Nimrod, Almo, Hollywood and Julius.
What was this tool? Meet Oscar! A young working cocker spaniel. I have been on dog sitting duty today whilst Robyn is working. Oscar is more like Houdini but he keeps the alpacas entertained. As for Tyke, the cats, the chickens and myself ? We're pretty worn out. Bye Oscar! 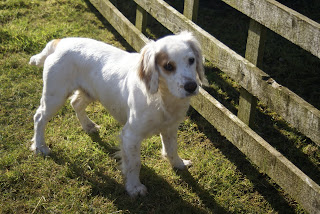