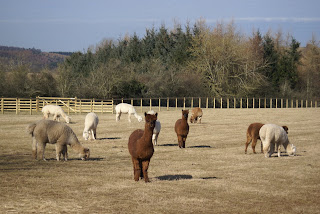 It has been a day for husbandry tasks today with some drenching, routine injections and toe nail trimming. Everyone has been well behaved. Camilla had her pre-birthing Lambivac (we are still treating her as pregnant...time will tell!) and was angelic. Even Katkin has decided that it is easier to be compliant. Katkin is one of our foundation girls and was a horror when she first arrived. She decided to appoint herself as leader of the pack and was rather zealous on the protection front. Paul got covered in the green stuff on numerous occasions in the early days. She is now rather sweet, but still keeps an eagle eye on things as you can see in the photo (front centre).

Feeling in a mood for getting organised, I have been getting rather ahead of myself and have booked our on site accommodation for next year's British Alpaca Futurity. March 2011; I will have forgotten about it it by then! Talking of alpaca shows I see that the BAS National Show has a light fawn class this year. Even more alpacas to be entered in the wrong class I expect!

I am now going to iron Paul's shirts, polish his shoes, pour him a glass of wine, to have with his beautifully cooked tea....I am off to Spain for a few days next week with Sue and Lesley...I really need him to do some paddock cleaning whilst I am away. Wish me luck!!
Posted by Unknown at 16:45