The nursery is now empty 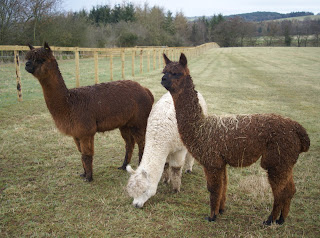 As mentioned in Saturday's blog, Pepsi Lola (our youngest cria at just over six months of age) was due to be weaned.

Before the deed was to be done, I managed to get a photograph of her this morning in her usual state of 'scarecrow' dress (she always sleeps under the hay racks and eats the hay as it drops!). She is pictured here with her sister Pebbles (on the left) and Minnie who is in the centre, as is usual.

The two sisters have such a strong family bond and are very similiar in their behaviour as well as in their appearance. It has been very endearing to observe how Pebbles has taken care of her sibling and how this has resulted in Pepsi displaying a gentle confidence about her position within the herd. From a very young age Pepsi has eaten from the troughs with the adults and has always been left out of any food squabbles by the rest of the herd.

Bahati (the mother of the two girls) had already decided that the time had come to think about this year's cria and was encouraging Pepsi's independence from her. Bahati has been an excellent mother, especially as both Pebbles and Pepsi were September births. Winter births are not always ideal and the timing might have been of concern for us. However during this year's dreadful winter Bahati always made sure that Pepsi was tucked up in the barn at night or during any bad weather, positioning herself in a way that physically sheltered her cria from the cold and the wind. The alpaca's mothering instinct never fails to amaze me, however that said; mothers of Bahati's calibar are to be prized and she most certainly is (in the show ring and off!).

Pepsi has now joined Willow and the other male weanlings, or weedlings as Paul likes to call them. I feel like the baby of the family has now gone off to big school...good luck Pepsi!
Posted by Unknown at 16:12