I am becoming a lazy blogger...but I take comfort in the fact that I am not alone...I suspect a lot of fellow bloggers are taking the same approach "I'll just wait until tomorrow I am bound to have a new cria to share by then"...but they are all keeping us waiting this year. Our next three due are Bozedown Celestrial (Bozedown Comet II), Inca Van Dieman Chaska (Lillyfield Jack of Spades) and Bozedown Magic Charm (Bozedown Omen). Very exciting prospects...although the most exciting wait will be for Morden Hall Honaria (Beck Brow Explorer) due date the 23rd of June...did you see that I just slipped that in in brackets...Beck Brow Explorer!!!!

Probably just as well that the cria have held off. It has been difficult enough keeping the three that we have got warm and dry. On Saturday the rain was torrential...really torrential...northern torrential! Paul was digging channels to try to divert water from flooding the shelters. Friends Sue and Lesley were over from the North East and all plans of a country walk were abandoned when it was all hands on deck (okay we did manage a pub lunch!).

Never liking to do things by halves, Sunday had me on the net purchasing an additional twelve...yes that's right twelve...dog cum cria coats. We had kept all of the females in the barn for most of the day on Saturday, and interestingly the three cria all had the smallest weight gain that they had had since birth. So I decided much better they be out but protected. This does require coat changes during the wet weather (although they do choose to come in themselves often). So in addition to our all ready full box of cria coats (including a foal coat for an adult) we have another1 x 14 inch, 5 x 16 inch and 6 x 18 inch, and a can of spray on Gortex for those that have been through the washing machine too many times. Normally we hardly use the 18 inch size as we tend to only use coats on the very young (unless ill) but the weather has been below freezing on a couple of nights...crazy!

Here we have some (wet) modelling of our old and new collection of dog/cria coats....

Firstly we have Esmee Mae modelling a Homestead Farm Supplies Cria coat now on its third season...and newly Gortexed. You will note the Beck Brow theme of a piece of hay casually hanging from the mouth. 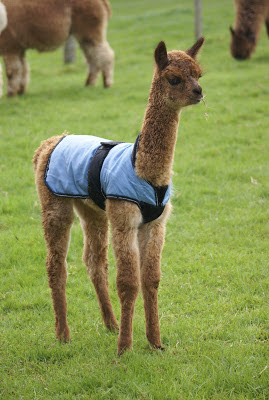 Next up we have Cat's Pyjamas modelling a Danish designed dog coat (16 inches) in a rather fetching check, available via Amazon (cheap but lets not discuss the tax issue). Note extended hay accessory. 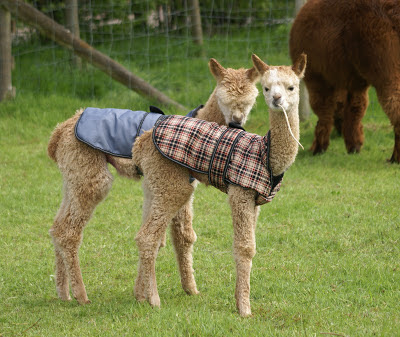 Last but not least we have The Crafter (oops dropped the hay accessory...typical male!) sporting the same Danish design dog coat in the grey. 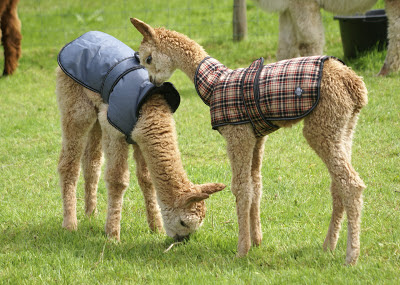 Having heard from Matt at EP Cambridge that the gorgeous Cambridge Stargazer is spitting off to EP Cambridge Peruvian Spartacus in Australia, we decided that we had better get some matings under way here so that she is not birthing on her own. Actually we only have two open females who are ready for mating, so Blackmore Vale Butterscotch had a date on Wednesday. Butterscotch is a beautifully fine female (17 microns at 5 years) who is owned by Amanda of Florens Alpacas, but she will be staying on livery here at Beck Brow. A multiple broad ribbon female, and very pretty, Waradene St Patrick didn't have to be asked twice! 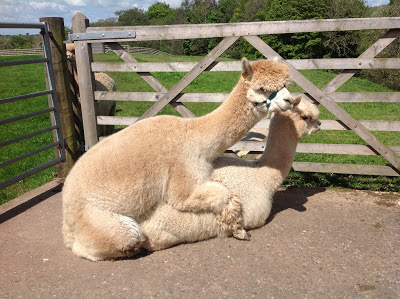 The same cannot be said for Beck Brow Explorer...who decided to spend exactly five minutes on his date then decided to lookout for the next one...I don't think so son...he generally likes around ten minutes...we will see, but I will be surprised if he has successfully done the deed. I think the problem was that he is so fully fleeced and EP Cambridge Aria also has a very dense fleece (it was also rather warm...you know double figures warm...at 14 degrees!)...whatever he couldn't really be bothered. Hopefully he is saving himself as he is proving to be very popular, with a number of ladies already booked in for outside matings.

The weather forecast is good for Saturday and Sunday...so maybe I wont be so lazy next week and will have cria to report sometime soon!
Posted by Unknown at 13:22