The British Alpaca Futurity 2013 was another resounding success. Brilliantly organised; everything rang like clockwork (well except when the ring steward stood talking outside the building when she should have been on duty...very nearly got the sack...but managed to escape with just penalty points!). It was amazing to watch the two judges (Amanda VandenBosch and Jill MacLeod) in action. I had the honour of being ring steward for Amanda and I learned so much (thank you Mary-Jo and Iain Smith from Bozedown Alpacas for the opportunity to do this). 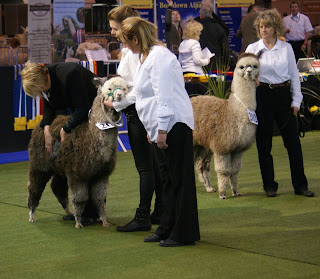 Beck Brow Paulo did well to get 6th in a very tough class where the first placed alpaca took white champion. Beck Brow Explorer was in the Adult White Male Huacaya class...this really is a tough one...these are the boys who are already working stud males...he really was up against the big boys...and got placed 2nd!!! We were so pleased. The judge commented that all of the placed alpacas in his group were world class. Explorer was praised as having the most organised fleece of the line up, the greatest length, equal density to the first placed alpaca, but he was just piped on fineness. And of course she loved Explorer's Phenotype...I may be bias but he is one handsome looking boy! (sorry no photos as I was stewarding in the next ring)

Alpaca Stud Nyetimber took the herd sire award. It was a northern breeder who took the Judge's choice again...well the same northern breeder actually...congratulations to Jenny and Graham for their success with Fowberry Nobility. It was a close thing...the judges were deliberating for quite sometime...between him and... Fowberry Regal Lily his full sister!!! It was fantastic to see so many of our friends do so well, and there are far to many to mention, however I must just say I am loving Cockerham Pagaent (1st placed junior white Huacaya male in the first class). Oh, and an added bonus: our Beck Brow Snooty Boots (sire Waradene St Patrick) is in cria to Fowberry Nobility (and will be returning again this year)

Apart from having a fantastic time (and thank you Cathy Lloyd from EP Cambridge Alpaca Stud for organising the gala dinner...the best food yet at the Futurity) we also managed to do quite a bit of business (not so easy when ring stewarding!). Lots of mating decisions made...for next year as well as this!!! The logistics of it all...well we will manage some how. 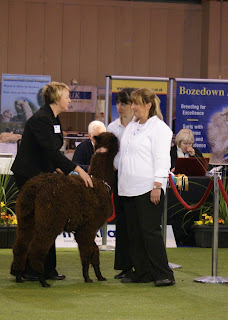 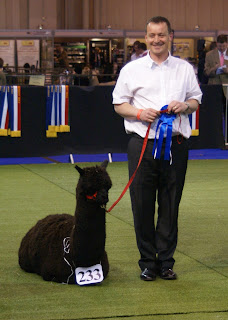 Nero Black Rose (we now have her dam Cambridge Scarborough) chilled with her 2nd place rosette! (Paul might be slightly chuffed too)

It is going to be an early night tonight as I am travelling back down to Toft Alpacas for a judges clinic with Amanda VandenBosch (I am going the night before I wouldn't dare be late again!)
Posted by Unknown at 16:42