Where did you come from?

Another busy week and a neglected blog. I have the excuse that I have hardly been at home since my last posting. So a quick catch up...

Last Tuesday I headed off back down to Bozedown Alpacas to be a handler on the BAS judge's certification course. It is always good to get together with other breeders and of course get hands on with the alpacas. However, I did have an extra incentive; as an apprentice judge next year I wanted to see what I was letting myself in for. I knew it wouldn't be easy, but boy do they put the candidates to the test. Six halter classes, 12 fleeces to judge and a written exam, and all of these marked by four qualified judges no less.

I arrived home late on Thursday night and spent much of Friday getting ready for the CFM Christmas Fayre. I had ordered some gift boxes for our woven scarves and these had arrived whilst I was away. They look great, but making them up from a flat pack was a bit of a conundrum initially, and I though I was going to be still making them up at midnight. Technique now perfected thankfully!

We took Alfie, Magellan, Synergy and Quintos along on the Saturday and Sunday. Quintos is such a show off, he absolutely loved it and wore his antlers for most of the day. He even got taken out of his pen to get his photo taken with Santa and the elves! There was a T-shirt printing company at the fair and I was tempted to get one printed:

However, we did meet a lot of interesting people and a number of potential new owners who are planning to visit the farm. The woven scarves were also a hit, so well worth making all those boxes! We will be at Ulverston Christmas market next weekend...although no alpacas as Paul will have to stay home to bottle feed. 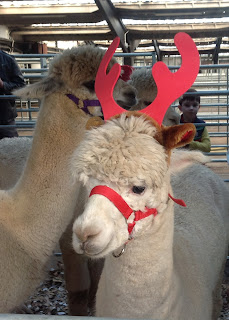 We appear to have got a gatecrasher whilst we have been busy. Some of you may recall that we had 7 doves...that was until Velvet decided to take the numbers down to 6. Well, when I opened the cote this morning we now have 7 again...someone has obviously decided they like the free food and accommodation!