No mention of the weather...

I seem to be so busy at the moment, so busy that I never have time to blog. Then when I do get around to blogging, I can't quite remember why I haven't had time!

Our latest scarves and wraps arrived on Thursday whilst Robyn and I were visiting the Country Living Christmas Fair at Glasgow. It was quite a journey to the fair with torrential rain all the way, but well worth it, and our friends from Nero Black Alpacas were looking very busy on their stand. The day out meant catch up on Friday, with lots of scarves and wraps to box up ready for Ulverston Christmas Fair at the weekend.

I persuaded Paul to come on the Saturday (not because he is a great salesman, but because I wasn't sure how close to the stand I could park, and may have needed someone to fetch and carry). Paul really doesn't enjoy such events and usually spends a fair percentage of the profits on coffee and burgers. His best moment on Saturday was when he was interrupted from eating his burger by a customer, the look on his face said it all.

Even the fact that we took just short of four figures on the Saturday didn't cheer Paul's mood. Hence, I replaced him with Ben on the Sunday, who found the half eaten burger in the pocket of Paul's Beck Brow fleece!

Our new wraps went down a storm and I have placed an order for some more, but as they are all hand crafted they will take some time to arrive (certainly not for this Christmas!). I also found another stockist for our yarn, and arrived home to some more orders. What was especially nice over the weekend was people coming back on the Sunday and buying scarves saying " I was with my Mum/wife yesterday and she just loved your scarves, so I have come back to buy her one as a surprise". We also had a customer who had bought two scarves on the Saturday, come back for more! 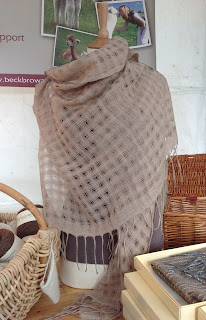 Our latest wraps (photo taken on ipad as camera in hospital)

One of the problems about these fairs is that we are next to other craft people...who all produce beautiful things. I kept admiring the craftsmanship of the products on the Oakbeck Forge stand...I especially liked a large companion set...I kept admiring it and they kept admiring my scarves...in the end a deal was done...2 scarves and a little cash...and I have it! I also bought two boxes made from reclaimed pine, and a handmade silver broatch! 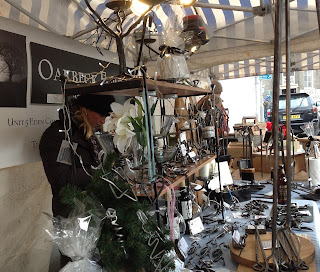 The Oakbeck Forge stand (Deborah does most of the work herself with other pieces crafted by her husband).

Next weekend we are at Hawkshead. This is another fair where the alpaca boys will not be with us. We actually doubled our takings this weekend without the alpacas, when compared to last weekend when we took them along. Less talking about Llamas and spitting and more selling!

Ben went off for an interview this morning looking very smart...I admired his suit...retro kind of smart...a bit Craig David I thought...where had he got it? Out of Paul's wardrobe it seems...it is so old it has St Michael on the inside pocket...for the youngsters amongst you; Marks and Spencer used to be branded as St Michael...a very long time ago. Paul's reluctance to throw anything away (even if there is no way he could have fastened it up) comes in useful now and again!
Posted by Unknown at 13:05