Well what a week...the ups and downs of an alpaca breeder...and thankfully we ended on an up. It was a bit touch and go and I was bracing myself...could I cope with any more trauma...but thanks to our amazing vet (Vicky) that wasn't the case.

Beck Brow Pepsi Lola ran in all the way from the far paddock to the barn at feed time (6pm)...It was Paul who noticed; "what is that?"..."what"..."that sticking out of Pepsi"..."OMG its a black foot". I donned my gloves and lubed up. I could feel that the neck and head were completely curled back. I really had to reach hard but I could get hold of the head, but couldn't turn it forward...call to vet...she tried and tried..."one last one before a C-section". That was when she realised that the cria was upside down and thus we both had been trying to turn the head the wrong way! Amazingly the female cria...named Beck Brow Victoria's Secret... has never looked back since! 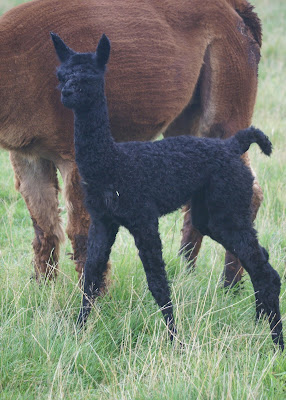 I have managed to weigh the cria belonging to the over protective black livery female, every day in fact...no injuries..not even any spit. No, she hasn't had a personality transplant...she is just a bit of a dip stick!On Saturday I went into the shed to sweep up before feed time and got the shock of my life to find the cria sitting there, completely on his own, with the rest of the alpacas at the bottom of the field. So quickly I weighed him...gained 200gs Yesterday, I decided to steal him...I grabbed him...ran out of the shelter...weighed him put him back...and she was so busy eating she hadn't even noticed! She seems to be getting better...I think she wanted to sniff my head this morning...but I don't trust her enough to find out if she is nearing as friend or foe! Mind you by the look on her face in the photo below...she looks the worried one...see what you get for being nasty...an unflattering photo of you on the blog...serves you right!!! 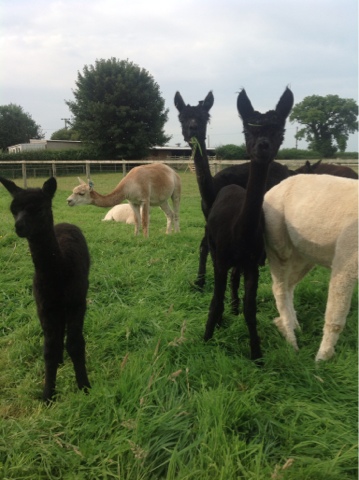 I won't name and shame but here she is with her daughter and cria. (that is the shed top left, so you can see why it was a shock that she had left him there)

I have to say that she is the exception to the rule, we have some gorgeous females on livery. One of my favourite females is Cambridge Sparkle. She has been chosen by Andi Ruedi to form part of an elite herd owned by Evi and Ivo Bieri. The females will be bred and will eventually be exported to Swizerland. Sparkle who is sired by super sire NWA Ltd Ruffo (now deceased making his genetics even more sought after) is eight years old, but her fleece has the handle of a yearling...it is beautiful.

Sparkle has a very promising female cria at foot (Edelweiss) sired by Silverstream Czar...Edelweiss is now nearly as tall as her dam and has a fantastic density and length to her fleece. One for their show team I expect. Sparkle has now been mated to Beck Brow Explorer...this one is going to be a stunner...I am going to be envious I know I am! 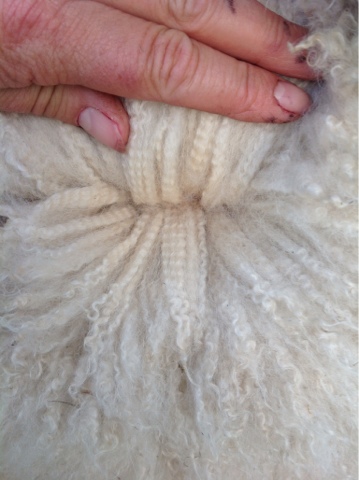 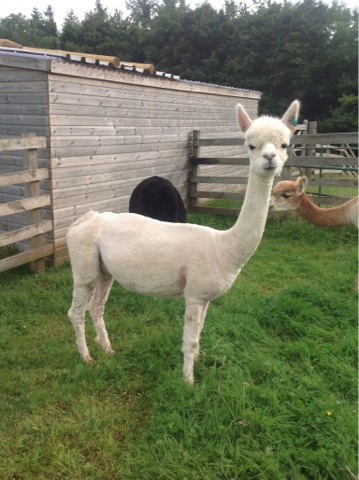 I haven't seen much of Paul today as he is busy building an enormous shelter...27 supports to dig in...20 to go...thought it best to keep out of the way!
Posted by Unknown at 18:05