Just a quick update as I have news...no not Pebbles, she is 386 days gestation today...what is going on this year with all these extra long pregnancies?

But I do at least have some news of births. On Saturday, at the unsociable time of 5.50 pm (which meant I missed getting the take away that I was looking forward to) Biba had a lovely blue black male...I feel like I have got someone else's herd...a herd of black males! 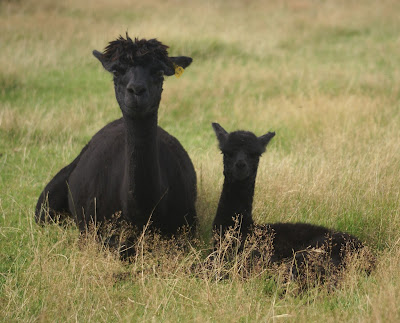 However, at last the tide has changed...on Tuesday not only do I get a brilliant white cria...but it is a FEMALE!!!! Yes, Renatta has had our first Beck Brow Explorer daughter. The news on Facebook prompted Shirley to comment "Hallelujah its a girl"...so that is what she shall be named...Hallelujah...I might drop the 'its a girl bit'. I am so pleased with her...she has Explorers head and top knot again and even his ears!. 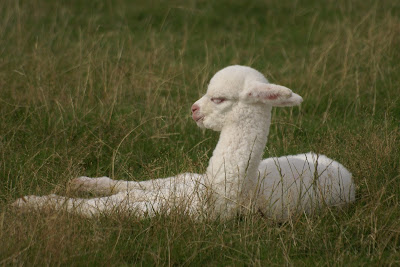 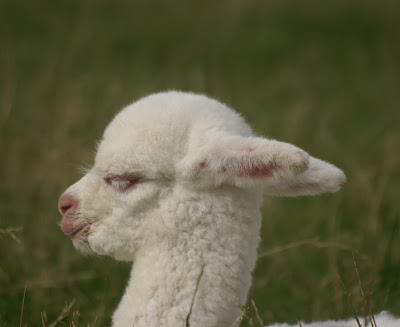 Close up of her head (I will get one of her standing but it didnt seem right to poke her just to get a photo!).

I am of course joking about the black boys, they are a delight and look lovely in the paddock. Here is Otis a Black Sabbath cria out of a mid fawn dam. He is so blue black he shines in the sunshine. 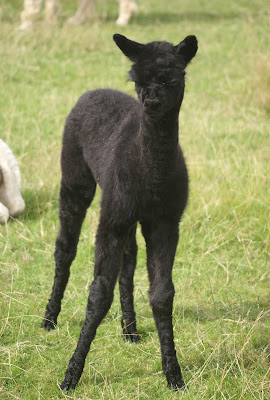 After setting off as a very protective mother; Boots appears to be slightly bored with it all, and when Duke of Wellington goes around calling for her, she looks up but doesn't bother to call back (he eventually finds her after being spat at by every other dam)...and she hasn't even been remated. Does any one else notice that...that the dams become less obsessed with their present cria once they become pregnant again...they just get more relaxed about it all. 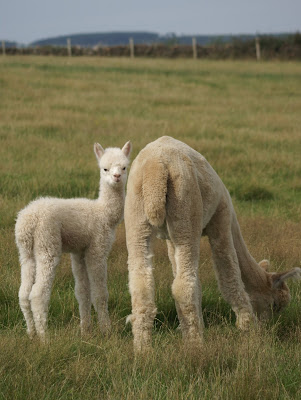 We are busy busy busy here with drive-by, mobile and on farm matings...but it is all good...well it keeps the boys happy!
Posted by Unknown at 13:05