Wednesday was spent setting up for the alpaca show at Westmorland County Agricultural Show. The weather wasn't looking hopeful...in fact the forecast was grim. By 5.30 pm we had made the decision that we were going to have to make a ring inside the marquee. We would then have to get to the show ground very early on the show day and change to the outside ring if a miracle happened and the sun decided to shine...it didn't!
Liz Barlow, our judge, did an excellent job, in what turned into a rather muddy show ring but thankfully everyone 'mucked in' and things were pretty slick...we even managed to meet the dead line for the grand parade...phew!﻿
We had a good turn out with 20 breeders entered and the rosettes were well shared out amongst them. We took three alpacas. Paige Turner (aka as Poppet...this caused great amusement when Criag had the inspection stewards looking for Poppet on the list of entries!) was our first out and got first placed junior fawn female. She is very dark fawn (verging on light brown the colour card was brought out again) so we were pleasantly surprised when she very nearly took the fawn championship...Liz was back and forward between the two...but eventually chose the older male, who went on to get reserve champion...very close indeed well done Poppet!
Next up was Fine Romance who was undoubtedly in the most closely contested class of the day...Intermediate White Female...and she got a very commendable third placed rosette.
And Finally...it was the boy himself...Beck Brow Explorer...Supreme Champion at Northumberland County Show...could he do it again?...of course he could....Beck Brow Explorer....Multiple Supreme Champion!!! Could I love him anymore...I think not...I am just a little proud!
Now I could tell you about all the wonderful things that Liz said about him...well, I could if Paul ever remembered...when asked his reply was "she liked him"...I guessed that... she gave him Supreme!! Seriously, I did manage to get a chat with Liz and Shirley Bettinson (apprentice judge) afterwards and they were very impressed....he really does have amazing coverage and consistency...offically gorgeous Explorer!
Did he 'pouffe'? Only once...he really was on his best behaviour. I think he has now got an association going on...trip out in the van...get something red...then everyone asks to look at your fleece! Although he did stamp in a muddy puddle when standing next to Debbie...resulting in a rather muddy white coat...but brown is better than green Debbie! 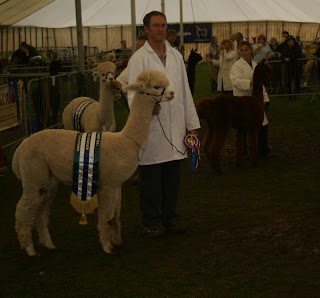 Paul with Beck Brow Explorer...Supreme Champion Westmorland County Show
I arrived home very tired...show organiser; chief steward; and exhibitor...it had taken it's toll...so down the pub it was for supper and a celebratory drink...or two! Cheers to all those who helped (with special thanks to fellow bloggers Andy and Bev. Hope the bruise isn't too bad Andy...the scars of the ring steward!) and and those who competed...hopefully everyone enjoyed the day.
Posted by Unknown at 07:01