Yesterday I spent the day reminiscing ﻿about our holiday that we spent in India earlier in the year...what prompted this?...was it beautiful sunshine?...wonderful indian food?...lazing by our infinity pool??...no food poisining!! Probably a bug to be precise. Thankfully I had no urgent tasks to do, as I didn't manage to drag myself out to feed the alpacas until 10.45, and then it was only the girls who got checked and fed (I could have called in some help but decided...a bit like myself ...that the boys would hardly starve without food for the day).
So back a couple of days to Wednesday when we spat off the new girls. Biba, the black girl was sold as empty, so we had no doubts there. She was mated with St Patrick. The plan is to  mate her with Black Sabbath next year (he is at Anzac Alpacas at present) but decided that we had nothing to loose by trying her with St. Pat this year. Both have some brown in their pedigree so we will see.
We had already decided at the auction that Renata (the top priced female) wasn't pregnant. Someone we know has a rather impressive orgling impersonation, and with a swift move behind her she dropped to the floor...I think it is those sunglasses that does it Lawrence!...anyway we thought that she was open...and she was. This was a bonus as we could put St. Patrick over her this year, and hopefully Explorer will be working by the time she is due next year. She was purchased with Explorer in mind. She has a very similiar fleece style with impressive uniformity. Only a couple of years before we find out what they produce!
The surprise was the third girl...Nicola who had been scanned pregnant and was supposed to be due the beginning of October... I say surprise, but once we got her home we did question the fact that she didn't look at all pregnant...and you guessed...dropped like a brick on the mere sight of St. Patrick. He was equally impressed; I don't think I have seen him be so affectionate whilst mating before. Initially rather disappointing, as a cria had been factored into the purchase...but actually I wasn't looking forward to a late born cria, and then we would have left her open until the spring... when Explorer would not yet have been ready (and we are realising the problems of leaving girls open too long...fat females! So waiting for him would have been difficult. Also this way it is not two novices together!) So  hopefully we get a St. Pat cria before she gets mated with Explorer in the autumn next year...so probably overall for the better.
It is pouring down yet again today. Paul has shown great concern over my illness, and has left me whilst he has gone to Durham to watch the England v India one day test match...but will it be rained off?!
Some photos from Thursday;
Camilla, who is very gentile and elegant, was not at all impressed to have her dignity tested by a pile of rowdy boys. 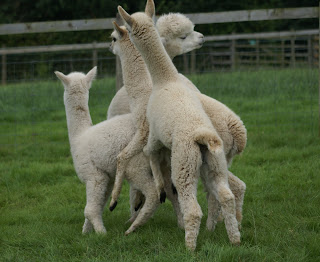 Who are quickly brought back in line!﻿ 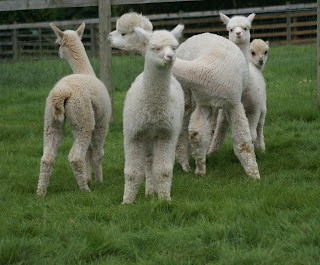 Magellan (front) Alfie in the firing line, Rumour behind her mum (and innocent), and Magum (rear)
Finally little Boots, who never stops posing and is an absolute little charmer...getting top of everyone's favourite list! 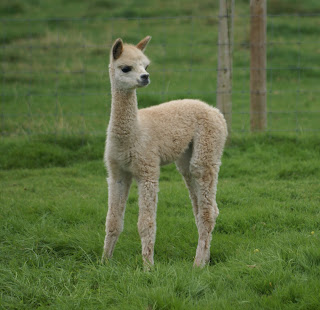