The 2nd of January....always a time for reflection?

Well it's always good to have a brief glance back at what the previous year brought. However, I am not really one for lingering on either the good or the bad that has gone before...I just like to look forward at what opportunities and excitement might lie ahead. I will just say that 2014 was kind to us.

This outlook on life, I suspect has never been more so than since the obsession with alpacas took hold, for of course we start thinking towards spring and the start of the birthing season. I have been finding it rather difficult to keep a lid on my excitement at the prospect of what Cambridge Stargazer (sired by  Windsong Valley Firedragon pregnant to Beck Brow Explorer) might produce for us. So, I was struggling with my glass half full approach, when I found her looking over an aborted female foetus that I found in the barn this morning.

The size fit with her gestation period. However, with further detective work undertaken, I am pretty sure that it is Holly who has lost her cria. Holly is eleven years old and was pregnant to St Patrick. Paul and I had just been discussing the fact that we would probably keep Beck Brow Honey Bun (Holly and St Pat cria from 2014) as it might be Holly's last female. Shame:(

The other aspect of the New Year is looking forward to the show season. This has a lot to do with getting together with everyone after the winter months, as well as checking out the competition. Having been heavily involved with the BAS National Show organisation in 2014 and again in 2015, I can't really pretend that it has only come to mind in January, but I am looking forward to getting out and about. This will be the last year that I will be Chairing the committee, so I am already looking forward to 2016 when I can exhibit stress free! Don't pretend that you having thought about your show team for 2016 already...they might not be born yet...but we all have plans! 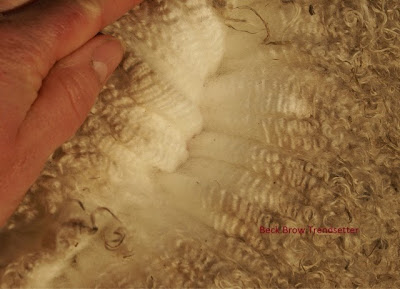 One thing in our alpaca lives that has been difficult to avoid looking back upon, has been the decision to take a herd of 40 alpacas on agistment. The alpacas arrived late 2013, under difficult circumstances and many were in a state of either stress, ill health, or both. It has been a challenge that took up a great deal of time in 2014. All bar one are now a picture of health which is satisfying (we still have a female under weight).

But the most rewarding part, is the change in their disposition. Alpacas who screeched, spat, bit and  kicked when they arrived, now eat from my hand. This aggressiveness was such abnormal behaviour for alpacas, we deduced that it could only be due to fear. The ones who didn't attack kushed in submission or flipped over their tails and urinated. It was a distressing experience and It has taken a lot of time and patience, but without exception, we have gained their trust.

Lisa, arrived with barely any fleece, such was the damage from mites. We were told that she was near impossible to handle and thus treat properly. Well, admittedly she was very reluctant to be held, so we penned her and sprayed her with Eprinex and maggot oil using a plant spray, holding her only to do her face and ears. Within three weeks I could catch her and treat her single handedly. I reflect on this because, yesterday I caught Lisa's cria when she wasn't expecting it, for a fleeting moment a panic crossed her face, then she remember she was safe. She rushed, then slowed, as she approached, smelt my head, tapped me on the shoulder with her nose and squeezed in for attention too.

We had a lovely family Christmas this year, with our granddaughter Hettie making it four generations present. It was very relaxing as we all mucked in with the morning alpaca rounds and preparation of lunch. Only one minor hiccup, when Craig, who had promised to peel the vegetables, couldn't find the only potato peeler he could apparently use (news to us). We searched the utensil drawers, finding three, but no...not the one he wanted. Having revealed that he had used it the last time he stayed, we accused him of throwing it out with the peelings.. that was me about to submit and peel, but Paul never one to give up, found it. This was after searching for far longer than it would have taken to peel the potatoes and boil them....and certainly far longer than the two potatoes it took Craig to break said potato peeler. Craig did the washing up.... 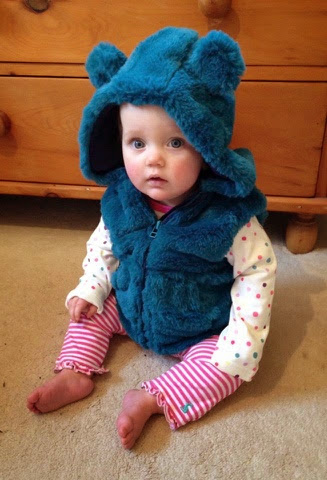 Hettie dressed in one of her Christmas gifts