Well that was a surprise!

I have to admit sometimes during the birthing season things can feel a little repetitive...every morning we get up at 6am...the females are always all in the barn...one of us gives Blue his bottle, whilst the other nips round through the paddock to close the barn door (so no one escapes before they have been weighed)...every morning there is nothing to report... and you get the feeling that the girls are saying "for goodness sake do we never get a lie in".

Well, that was the case until yesterday morning...a very foggy morning...a morning where I was the one closing the gate...and there was Chaska (382 days gestation) sitting just outside the door..."what are you doing out here Chaska?"..."and whose is that cria that you have?"..."OMG it's yours!!" Yes sitting kushed and looking like it was at least a week old, was a dark fawn female. Yipee Chaska...a change from the two white males (from fawn sires) we have had so far.

Now I had a bit of a dilemma as I didn't actually know when the cria had been born, so I guessed by the fact that she was partially dry but not completely, that it would have been around 5am. Why this was an issue was because she didn't drink...she didn't even try to suckle...she ran around...but didn't go anyway near the udder. So decision made, she was given cows colostrum which she took readily from a bottle. It wasn't until 6pm that she actually figured out where the milk bar was. In my experience the crias who have had an extra long gestation period are often rather dopey (technical term) and I think this combined with the fact that Chaska was tired and kept sitting down meant that we were right to intervene earlier rather than later to ensure adequate passive transfer. 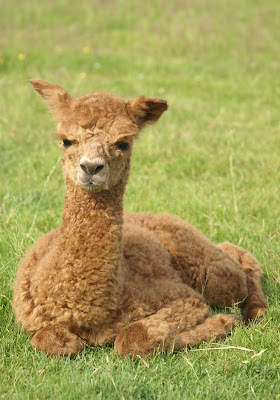 As she was born in the fog and at the start of a scorching day, we have named her Summer Haze 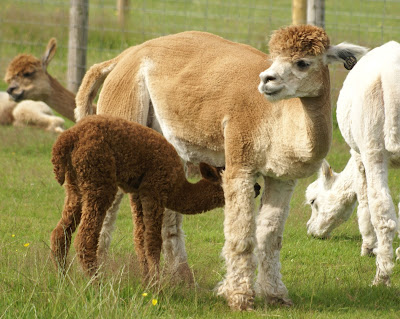 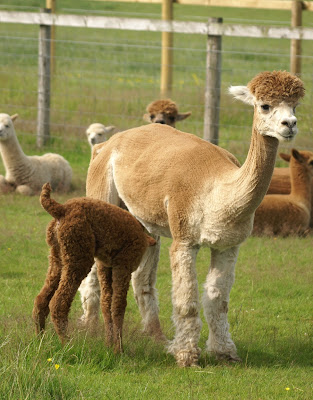 We are enjoying continuous sunshine...there might even have been a grumble or two about being too hot...but we have got all our hay in and enjoyed a BBQ and a few glasses of Pimm's and real ale at the end of the day.

It was already scorching when I was out with the camera at 9am this morning. The cria are all finding their individual ways of keeping cool... 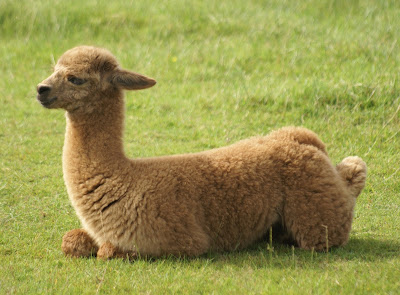 Jetson...the rocker style to keep the under carriage aired 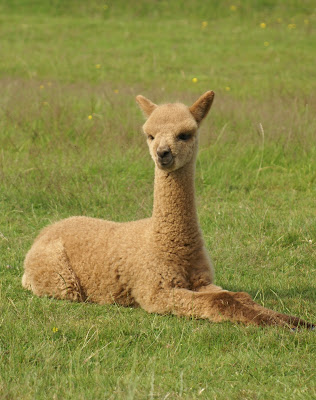 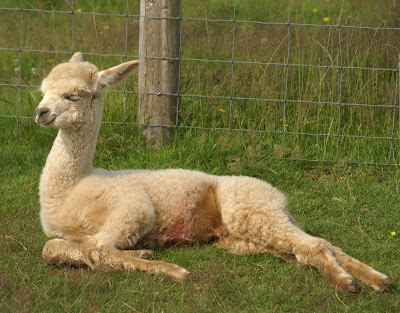 whereas Barnaby has no concerns about modesty and bares his all 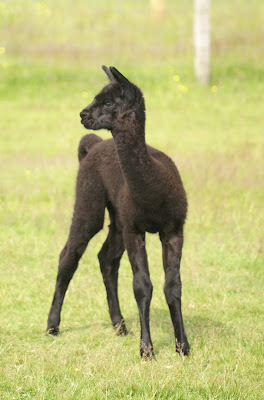 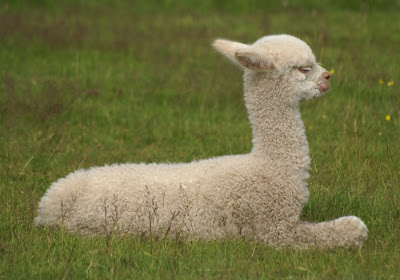 and First Edition (Eddie)...well he is just plain cool.

Eddie looks so like Explorer as a cria it is spooky. In fact I keep calling him Explorer by mistake. Not only is he the image of him he has turned into a sex pest just like his dad...he spends his time orgling on the back of anyone he can catch. We have a number of Explorer progeny still to be born...if they all look like peas from the pod I might just have to consider ear tags!!
Posted by Unknown at 11:36