The problem with an over long gestation period...

We have been keeping our vet busy this weekend with call outs two days in a row. If only I had listened to my instincts, I could have dealt with today's problem yesterday...but easy said with hindsight.

Today's call was for Summer Haze. As told in my last blog, Summer was born at 382 days gestation and was already kushed when we found her at 6am. Our experience of gestation periods of this length have never been good (Explorer 385 days needed a plasma transfusion) so we were concerned about her even before she was born. Typical of such cases, she was a bit of a dummy cria and didn't even try to drink from her dam until that evening. She also showed signs of dysmaturity with floppy ears and was slightly down on her pasterns. So the decision was made to give her cows colostrum.

However, I have had a niggling worry about the fact we didn't know how long she had been born before we found her. Had we got the colostrum in within 6 hours? On day 1 she kept her birth weight. On day 2 she lost 300gs. As neither of us had seen her pass her merconium (and the ones that don't get their mums colostrum seem more prone to constipation) we gave her a soapy enema...nothing...so we gave her a Fleet enema...she had definitely been constipated. This is when I falsely hoped the problem was solved.

Wrong...this morning Summer had lost a further 500gs. She wouldn't take milk from a bottle (which she had done on day one) and Chaska had plenty of milk. Thus, concerns about failure of passive transfer were now more than a niggling worry. Her temp was 39.4 and her respiratory rate was 35. So I gave her antibiotics and an anti- inflammatory, then called the vet to give her a plasma transfusion.

It was interesting when discussing the case with our vet that in his experience it is the same with cattle and horses; an overly long gestation results in the presentation of calves and foals that are somewhat dysmature and dummy. He has also found that even if they do drink that they have a reduced ability to absorb the colostrum and produce anti-bodies. He has suggested that if we have any more extremely long gestations then we should just give the cria plasma as a matter of course. 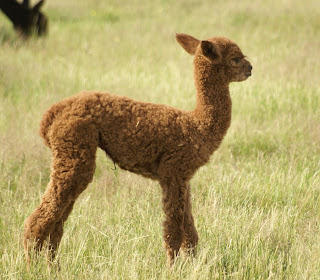 So as I said in hindsight we should have given the plasma yesterday when the vet was already here to Camilla (Explorer's dam and thus very special). Camilla rather caught us out. Explorer and St Patrick both had lady friends to visit on Saturday morning, but we had been keeping a good eye on the paddock and Kathryn and Paul (Crimdon Alpacas) had been looking at the cria just a short time before. However, when I went out to the paddock as they left, there was Camilla being chased by Crafter...and there was a cria head chasing Camilla...a head and no legs. As I ran to the barn to get Robyn and the birthing box Camilla ran after me ( how amazing are alpacas?). Unfortunately neither Robyn (who is very good with lamb reposition but claims that to be doodle in comparison to alpacas) could find room to get the legs forward (both completely extended back). We had tried pushing the head back to make more room but to no avail.

What we learnt from the vet was to push the shoulders back (this takes a great deal of pressure) then hold the head back with the outside hand. The hand inside then pushed the shoulder away to the side and then slides down to cup the feet. Repeat both sides! It is just making enough room. Camilla was a star throughout. The cria...a female...was given IV bicarbonate which was repeated 15 minutes later and she was up and away. Weighing in at 6.8kgs luckily she was on the smaller side. Her sire is EP Cambridge Fortitude. I was going to call her Cotton Bud but as Robyn says that it makes you think of ear wax I may have to reconsider! 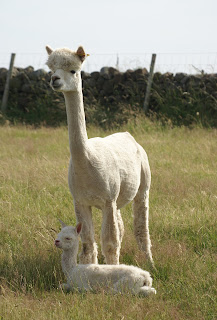 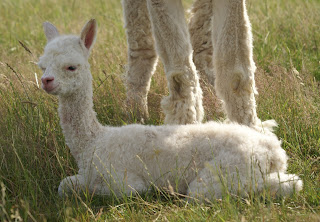 So two girls in a row that makes it 10 boys and 4 girls of our own. Still we have some lovely males so we are not really complaining...and we still have another 14 to birth (including one belonging to Robyn and Craig) 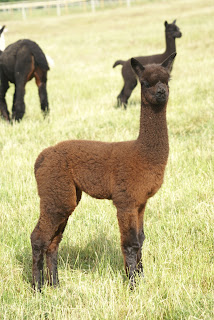 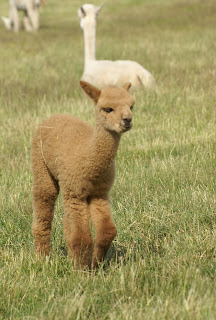