Lots happening here, plenty of excitement, a bit of nail biting...but no births!

Firstly the day to day stuff...poo picking...we got a bit behind over the weekend. A dirty house is one thing, but a unclean paddock is quite another...I start getting angst. The problem was that Paul had paddock sweeping on the agenda for Saturday afternoon, after he had done a couple of mobile matings with St Patrick. Well actually the problem wasn't that Paul had it on the agenda, it was that St Patrick decided after being coaxed to do the first mating, that he really couldn't be bothered with the second. Hence Paul was rather late home (St Patrick is going in the paddock next to the females tomorrow ready for next weekend's matings. The thing is we have no open females to tease him with, but we will see if it helps).

So on Monday I got out the poover. I had forgotten how therapeutic poo picking can be. it is great watching the interactions of the alpacas, whilst they forget to notice that you are there.

However, the sweeper does such a good job of the large areas, and essentially harrows the paddocks at the same time, thus Paul did get the larger areas done before heading off to work on Tuesday. 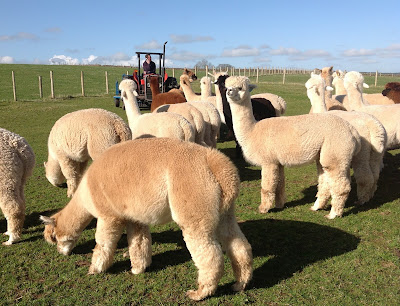 Paul sweeping the pregnant female paddock...taking a call on his mobile...the girls are intrigued.

I had taken my iPad out to try to get a photo of Snooty Boots, who I think if looking lovely in full fleece.  However, when shouting out 'look Snooty' to get her attention...it would appear that Lucie and Sophia thought it was a command... 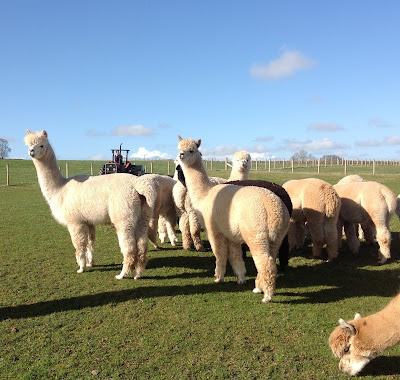 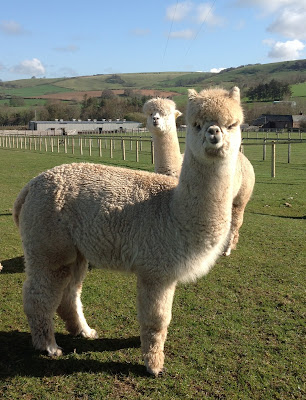 Now for the exciting bit about the weekend...well I am being a bit of a tease as I can not reveal all...except to say that I have been filling in forms...to arrange for screening of an alpaca in order for it to enter the UK. We are very excited (yes that is really a we...Paul too!). The photo below was taken recently and is of a male cria who is one month old...there is a connection... 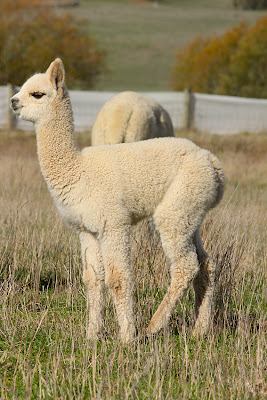 On the subject of connections, I was so pleased to hear that Valley Alpacas The Diplomat took first place in the sires' progeny class at the Heart of England. I did remark how his cria were like peas in a pod when I saw them at the Futurity...the judge's training may be working! Congratulations Sue...well deserved!

I have my first halter class apprenticeship at the weekend followed by a fleece show apprenticeship during the week. I am going to be away from Saturday until the following Sunday so Paul will be on birthing duty for the week (they were supposed to have all birthed by now).

Amanda has been testing me on my assessment of micron in preparation. Interestingly although I have lots of fleece samples (not just from my own herd) I admired Anzac Almost Illegal's fleece sample (blindly) on three different occasions (2010, 2011 and 2012 samples)...decision made he needs to have some Beck Brow matings before he goes out on lease for the summer.
Posted by Unknown at 17:21