Lots happening at the moment, so I thought I better write a blog before it becomes an epic. As did most of the country, we had great weather over the weekend. Ideal for birthing...but Saturday passed without event...our bets were on Chaska who was off sat on her own and hardly moved from the spot...but no.

By 11 am I had decided that Sunday was going to be a 'no show' day too. So being a day of relaxation and a bank holiday weekend at that, I decided to sit in the orchard (overlooking the birthing paddock) and read a book. However, having low levels of concentration during the birthing season, I decided at 12 pm to take the camera out into the paddock...and there in the dust bath...all on its own...was a newly dropped cria...what a shock, it took a moment or two to recognise what I was seeing. I think poor Bozedown Celestrial was a bit shocked too. She obviously had had a quick labour and had birthed in amongst a group. After getting over the surprise she has turned in to the most loving mother with loads of milk. We have decided to name him Beck Brow Bespoke...designed by Bozedown...commisioned by Beck Brow!! (sire Bozedown Patriot).

On Monday it was off to Northumberland County Show where I was apprentice judge to Nick Harrington Smith. The weather had changed and it was rather nippy but everyone had a great time and thankfully the rain held off. Congratulations to Chestnut Farm Alpacas who took Supreme Huacaya with their adult white male; and to Newland Alpacas who took Suri Supreme with their senior white male.

We weren't so lucky with the weather back home and Paul was left with the task of getting all our alpacas undercover for the night ready for shearing on Tuesday. With a rather later start than anticipated; Ben (our shearer) didnt leave ours until 11.15 pm. My poor old body was aching on Wednesday after all the standing and bending for two days...but was I going to get a rest Wednesday...no chance.

With the barn looking like a fleece bomb had exploded in it, and bags of fleece all over the place; I had plenty to do...but Willow decided to add to the chores by giving birth before I had even got started on the tasks of the day. Actually she just did it all herself. She is a fabulous mum...she obviously decided that the damp weather was no place for a cria and brought her into the barn herself. Willow is owned by Wiseman Alpacas who were very pleased to add another female to their liveried herd. They have named her Wiseman Sweet Dew Hazelnut (Hazel for short). Another fabulous coloured cria from Waradene St Patrick of EPC. 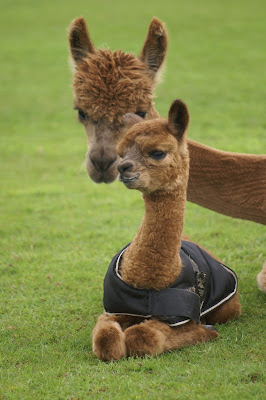 Wiseman Hazel with mum Willlow (Paul dressed her hence the messy fastening...you wouldnt expect Paul to be able to dress a female now would you!) 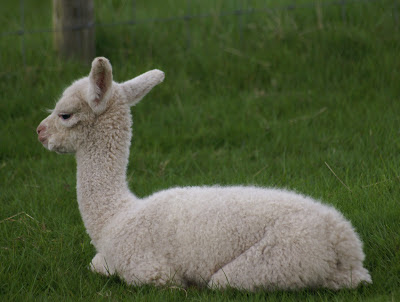 Although the actual shearing day is not the highlight of my alpaca year; I do love to see the fleeces off the herd. I always think that it puts all the alpacas on a level playing field. Quite the opposite of humans...the older that the alpaca gets...the better they look naked when compared to competing with their fleeces on. Take Holly for example who is nearly 10 years old, as is the norm her fleece growth has slowed right down...but shorn she could pass for a youngster. Talking of which...how cute are Sox and Coco? 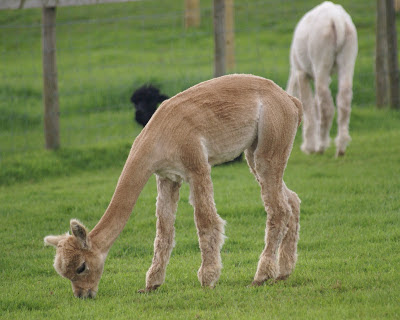 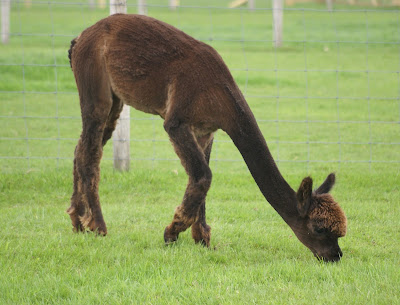 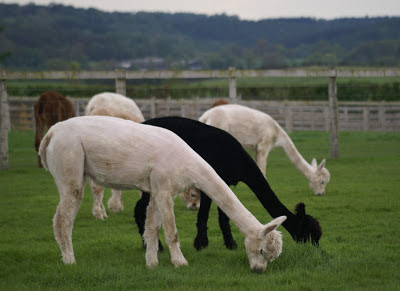 Some of the females enjoying some green grass at last.. 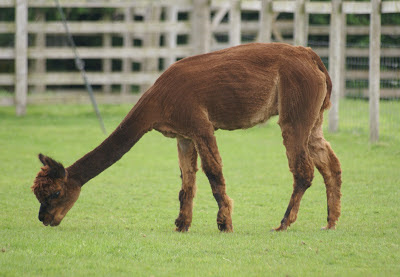 Finally, I thought this photo of two very contented females (Willow and Hazel) was just so sweet... 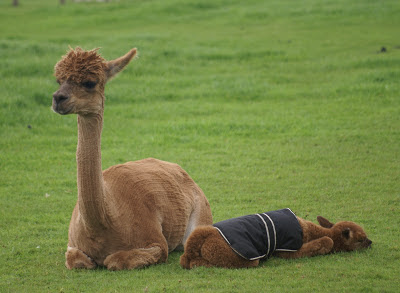 P.S It looks like our first Lillyfield Jack of Spades cria may be from Sophia rather than Chaska...my bets are on for tomorrow...Chaska must have just needed her massive fleece off as she has now returned to normal behaviour!
Posted by Unknown at 12:57