When I wrote my last blog I slipped in a prediction...the prediction being that Silverstream Galaxy would give birth on the next sunny day. With that in mind I decided that there was no point in writing another blog until I had a birth to report. Well, to be fair we haven't had what you would call a 'sunny day' however I did strip down to a single fleece and one pair of socks on Saturday...but no we are still waiting. I had thought that calculating mean gestation times for our females would give us a better idea of a birth date...but as all alpaca breeders know...they will birth when they decide and not when we want it to happen. I keep reminding myself that the last time that we had a birth due in April (the 10th) Explorer was born on the 29th of May...385 days...but worth the wait!

We have been getting a lot of new fencing erected near to the birthing paddock and the girls have been kept entertained watching all the goings on. The men are due to finish today, so maybe when they are bored tomorrow we will get some births! Paul decided to build a field shelter himself in the end. I rather like his bespoke designs. This latest one can be accessed from two small paddocks and the gates can be used as the divider between the two, or used to close them in. This will be Explorer's new home when it is finished. Our land is split by the farm lane, with five acres on the far side. Thus it makes sense to have this as the quarantine paddock (ponies are on some of the land too). So the boys will be getting moved into the new paddocks which are within the main body of land. Still quite a bit of work to do....Paul's field shelter is taking shape

The quarantine group will be made up of three new females. I introduced Inca Garland on the last blog. Today it is the turn of EP Cambridge Aria. Aria is a daughter of EP Cambridge Peruvian Caesar, a male who was always kept in-house by EP Cambridge Alpaca Stud (Aust) so pretty rare genetics in the UK. Although white herself, she has consistently produced fawns when put to a fawn sire. However, her most exciting progeny so far is the very impressive white male; Valley Alpacas Diplomat. She fits well with our breeding goals, especially that of low variation in micron having an SD of 3.9 and CV of 15.60 at 5 years of age. 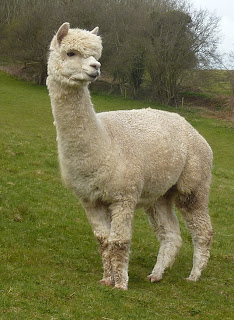 On the subject of low variability of micron; there is an interesting article is the latest issue of Alpaca Culture. Titled 'The Who, What, Why and How of Skin Biopsy', by Rob and Joanne Stephens. Of the alpacas studied (and we are assuming that most are elite females or stud males) the average micron variation between primary and secondary fibres was 9.2 (over the 3 studies). They quote Dr Norm Evans: "males with a wide micron variation (between primary and secondaries) pass this on to at least 80% of their offspring". Wow that is a high percentage, especially with such a negative trait. He continues "Anything under 5 to 5.5 seems very desirable and genetically strong". Now I know all that might make me look like a bit of an alpaca anorak...but I need to show off...BECK BROW EXPLORER...difference between primary and secondary fibres...5.3 microns...and 80% inheritable...looking good my boy!

Right, the next blog will be featuring a newly born cria. My prediction for Galaxy is...a fawn female that looks exactly like St Patrick. Galaxy is the grand dam of Foxy Sox so a duplicate would be good. Well one things for certain it will look like St Pat...he likes to pass on his good looks. He has his first mobile matings on Saturday...he will no doubt return home and give his paddock mate Snowstorm a hard time...once he starts mating he does get rather above himself!
Posted by Unknown at 14:00