So much for being a hard northerner...the flu has got the better of me...having tried to soldier on I have had to give in to antibiotics for a secondary chest infection. Feeling much better today...I am even considering eating something that requires a knife as well as a fork!

I have learnt a few things this week:

Yes, that just about sums up my week!

Amanda came yesterday and helped with some sweeping out and got mobbed by the girls. I think the alpacas have missed me spending my usual amount of time with them (or it might be the lack of carrots! ) Even Explorer had a snuggle yesterday. He was a bit coy about it, and pretended it was under duress, but I understand he has to look macho in front of his young boys!

As Amanda so rightly remarked, Explorer looks like he has been hot wired. He still has no visible guard hair, even as an adult working male...not even on his chest...remarkable! If Explorer passes on this trait to his progeny (and it is highly heritable) we anticipate that he will be a male who will have a massive influence in taking the Beck Brow herd onwards and upwards (look I am proud of him.. no point in pretending to be anything other than!!) 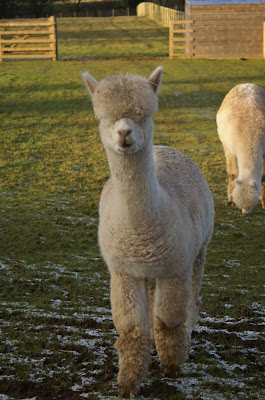 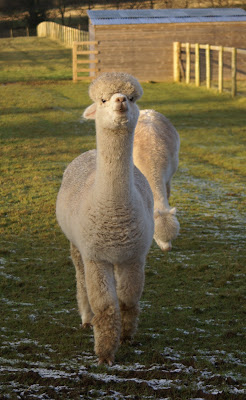 "Oh it's you...a little trim might be in order when you feeling up to it!" 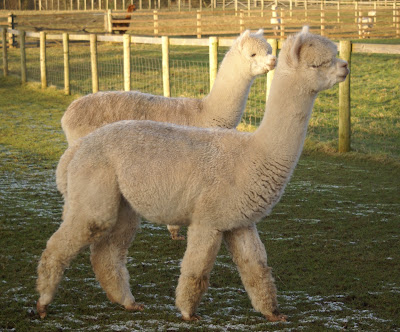 Beck Brow Explorer (just look at the fleece coverage on those legs...and no guard hair to be seen) looking extra special!! Beck Brow Magellan behind.

The winter has brought a few changes in the hierarchy with the male herd. Legacy of Purston (15 years of age) has lost his lead position in his group to Waradene St Patrick, who has seen Legacy weaken with age. Legacy, who is wearing a coat, gets extra rations to see him through the cold. In the past St Pat respected Legacy's space but now I have to stay to ensure St Pat doesn't take all of the feed...poor Legs...that's natural progression for you! We will really have to review our stud males and consider putting some on the for sale list. Although Anzac Almost Illegal has an incredibly fine fleece for a fawn (5th fleece 22 microns and CF 94.7%) we do not have enough work for him whilst we have St Patrick, Black Sabbath and Explorer, so he may be one we have to part with?

P.S Paul got up early this morning to break all the ice on the water troughs before he went to work...think he might just be feeling a little sorry for me...only a little!
Posted by Unknown at 11:29