Many thanks for your comments and emails regarding Velvet. We had a really tough﻿ night with neither Velvet nor myself sleeping a wink. As you may have picked up we were not at all impressed by the treatment given by the on-call vet, but unfortunately being Sunday this was our only option. It was the longest night ever, just watching the clock and waiting for 8 am to come around, when I could then register her with another veterinary practice (the one which we use for the alpacas, they are less local, but with hindsight are well worth the extra 30 minute drive). There was a point at 5am when I was beginning to lose hope, she was having numerous small fits and was totally out of it. I was concerned about her liver but took the decision to give some Metacam which did take the edge off. I was in tears... Paul was in my dressing gown...trying to hold back the tears in case he looked like a girl!

Anyway things are looking a bit better. As we expected, and many of you suggested, it appears that she has ingested some toxin of some description. We did suggest this to the other vet on the Sunday but he was unconvinced!. This morning I asked why dogs could not be given activated charcoal (given tubed to absorb toxins...something used a lot in A&E). The answer was; it can be and will be, but unfortunately we have probably missed the window of opportunity...argh! I have just had an update and she is to stay in doggy intensive care overnight. She is on intravenous fluids and regular intravenous diazepam. Her renal and liver function tests, as well as all other blood work, have come back normal (to be retested in 2 days as damage can be delayed...but hopefully not). They also think that she may be responding to light (difficult to tell as her wiring is all crossed at the moment, but there is hope for her sight returning.) The best news of all... they said that she had just given a little wag of her tail, she could barely stand never mind wag her tail earlier. Velvet is normally the happiest little dog ever...so no tail wagging...that was bad. Fingers crossed Velvet, our little bundle of trouble and joy. 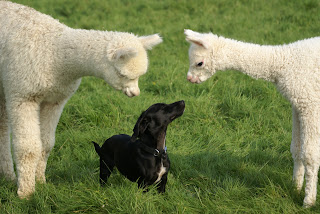 Velvet taken a couple of days ago...Magellan and her best friend Quintos looking on.
Whilst totally sleep deprived this morning, I have made a couple of rash decisions that probably would have been better slept on. I am sure that I will probably regret them. But they are not life or death, and in the grand scheme of things, that is all that really matters after the past 24 hours we have all had.﻿
Posted by Unknown at 16:11