I am afraid my blog posts have become a bit infrequent of late...now that the birthing season is over and the alpaca shows are all finished﻿...blog content is lacking. I could tell you that I poo picked for over 4 hours on Wednesday (3 times I had to empty it...Paul was nearly impressed!) and sorted fleece on Thursday and Friday for 5 hours and 6 hours respectively...I also went to Tesco's... but you really wouldn't want to know.
Actually I went to Tescos to get a passport photo...it seems that the photo on your driving licence is only valid for 10 years...it was obviously a mistake having the licence run out on the year of a big birthday...I was depressed all day...you know how it is in those booths...all photos are exactly the same...soulless. Well there I had in front of me the 2 photos...one aged 40 and one aged 50...exactly the same...same lack of expression...same hair style...but just more saggy...maybe I should have adjusted the seat a bit higher.
I won't share with you the scary sight...even if it is seasonal...but instead a pretty face belonging to Parisien. Parisien is actually sold but is staying with us until early next year. 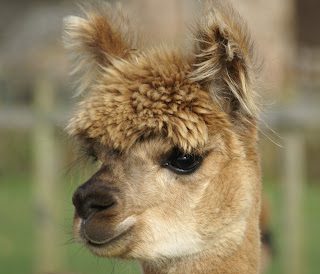 Beck Brow Parisien
Paul has been busy doing something useful...putting the roof on the field shelter that has been half finished for a couple of months. This is the mark 3 version of our shelters. The first one Paul constructed had a solid coated metal roof...but the alpacas found it rather dark. The next one had a plastic see through roof...but the alpacas found it rather warm when the sun shone (I know it's sounding like Goldilocks)...the mark 3 version is half and half...providing shade and light...the alpacas like it! 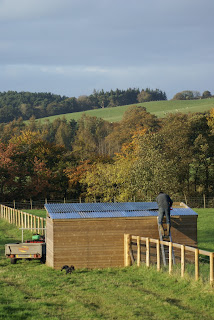 Paul finishing off the field shelter roof
I have been looking back through the photo archives today...checking out how the cria looked last year at certain ages (I was really wanting to compare Explorers fleece with Rumours at the same age)...and I was surprised to see how dark Poppet was when she was born...I did register her as brown...she won the Champion Fawn Female at the YAG show...amazing how they change?﻿ 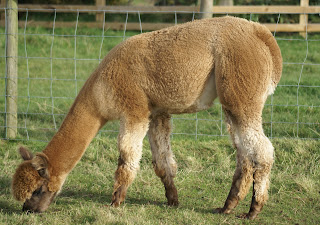 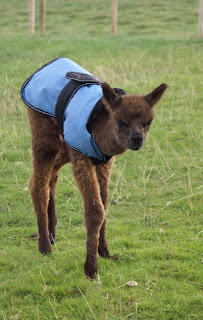 Poppet at a few days old
Paul has just come in to tell me is ready to help with the drenching...Fasinex for prevention of liver fluke so must go. So as I said not a lot to report but all good...sold quite a number of our throws and scarves...and it hasn't rained all weekend!﻿ I will finish with a couple of photos. 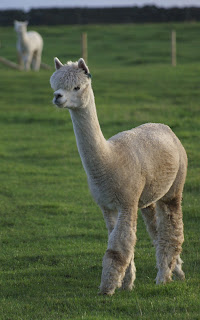 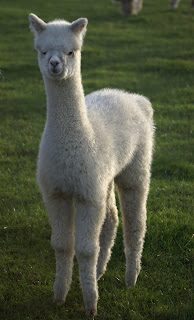 Easter-Wood Adelle (again!)...Dave did ask how I got the alpacas to pose...answer Velvet!
Posted by Unknown at 16:10