Yesterday was one of those days when there was so many things to do on 'the to do list' that I ended up doing very little. Self regulation requires discipline...it was definitely lacking yesterday﻿...it was also cold, wet and Monday. As a consequence today has had me work doubly hard.
On the immediate list:
Fasinex (against liver fluke) to be given...whole herd
Vitamins paste/injection to be given...whole herd
Vecoxan to be given as prophylactic measure...late born cria
Toe nails to be trimmed...those in need
Paddock cleaning (always on the list)
Content to be written for new website
Photos to be taken for new website (product range)
Fleece to be sorted so that there is a product range
Lots of emails to be sent
Etc...Etc...Etc
Paul decided at the weekend that the task of paddock cleaning was not only to be allocated to yours truly...but that it would be best done on a daily basis...Paul does not know how to ride a bike...but if he did... he would most certainly be on his! But as a nod to my duties, I did do a couple of paddocks. I also wrote the content for the website and took some more photos, so not a bad days work. Feeling on top of things I even agreed to take on some nursing-legal work...this has instructions and a deadline so is good for my time management...it is also incredibly interesting...and I get paid!
Feeling a bit reckless I decided to throw one of our 100% alpaca throws into the washing machine (inside a duvet cover)...wool cycle...non-bio Persil (best thing I had available) and a drop of fabric conditioner. Thrown over the banister to dry...it has come out a treat...actually softer that before it was washed...the scarf came out equally well. So that's a scarf and a throw that I have acquired in the name of product testing!
Explorer has had his toe nails trimmed...boy was he mad...he didn't behave too badly...it was all in the eyes...he was blazing. Explorer is now going to the YAG show on Saturday hence the pedicure. He was entered but we had decided to give it a miss as we though that Roma was pregnant (not the case). In the mean time I had agreed to help out as Chief Steward (BAS training to level 2 is required so a limited number of people were available). Then I was asked if I could take the BAS trailer (this is stored in Cumbria) and on a whim I decided if we are going to tow a trailer lets just take some alpacas...Explorer is far too fat...he is filthy...probably not a good decision...but he does enjoy himself! More reckless behaviour?
It is hardly surprising that he is fat with the amount of grass that we have...it just never stops raining! Here is Finesse ankle deep in lush grass. I have been having lots of deliberations over females...I had decided that we had no more females for sale this year...however we continue to get enquires...but I really do want to hang on to her. 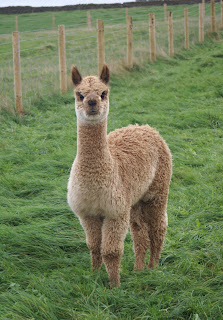 Beck Brow Finesse
Poor Magellan﻿ (looking rather soggy) got such a fright when he wondered up to me with some greenery hanging out of his mouth...for a moment I though that it was ragwort...but thankfully not. 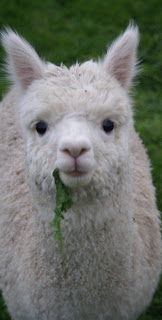 Magellan...with his salad
Quintos and Boots remain firm favourites. I have somehow started calling Quintos 'Cute Pants' . Not sure how that happened...I wonder if it is because he is always with 'Snooty Boots'!﻿ 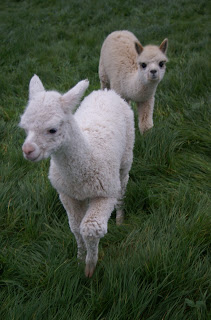 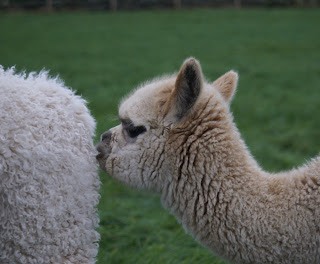 Naughty!
The mums and cria are now in a paddock that is completely new to them (this years hay field and prior to that grass let). We are preparing for the arrival of Easter-Wood Metisha and Easter-Wood Adelle and have been moving the herd around 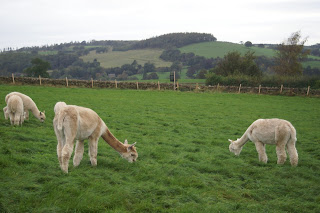 A new view for the mums
In the opposite direction the young girls are next to the house. As you can see we really are in the valley. With alpacas in the foreground, cows in the centre and sheep at the top...it really is a layer cake of a country view!﻿