I woke up this morning...well that is not quite true as the alarm woke me up﻿...but anyway I woke up and I realised I felt quite different. I hadn't really been aware of it, but a little anxiety had just been hanging around in the background during the latter part of last week. On Sunday the reason became apparent...I had been pretending that it wasn't really happening...if I didn't think about it...didn't write about it...it wasn't true...What was it?
On Monday we had had a visit from a lovely couple who were interested in adding a pregnant female (with or without cria at foot) to their small herd. I had a couple of girls in mind but we started by discussing what exactly they were looking for, and their plans for the future of their herd. It became apparent that they were after alpacas that were friendly, easy to handle, and in a mixture of colours. In a nutshell  they wanted to enjoy seeing their alpacas in the paddock and enjoy being around them.
Now, I like to think that I am a good judge of character and Kathryn is a nurse (caring and practical skills), they live on a farm, and have all kinds of animals as well as alpacas...and that is why...I agreed to sell two of my favourite girls...two of my friendliest girls...at least one of which I had decided I was definitely keeping...yes...two of my weanlings.

After talking with Kathryn and Paul, we decided that taking two young girls, who would not be ready to be mated until next year, would mean that they could enjoy and develop a bond with them without the pregnancy hormones. They could then bring them back for on farm matings in 2012. It is tough letting the babies go, especially as they are the sweetest and friendliest...but Nutmeg and Tabitha have gone to a fantastic home. We set off early Sunday afternoon across to the North East coast...and as I expected...they have fallen on their feet. Kathryn and Paul obviously adore their animals and I have no doubt that they will be treated like princesses.

Legacy of Purston (one of our stud males) has also gone on a summer holiday to the seaside (on lease) with a beautiful coastal view in one direction and girls in the other; we left him in his element. It was lovely to see how quickly they settled. I have had an email from Kathryn this morning confirming all is well (Nutmeg and Tabitha are already allowing Kathryn to touch them...allowing is not the right word as they actively seek affection) and with CCTV in their paddock they will be well watched over. 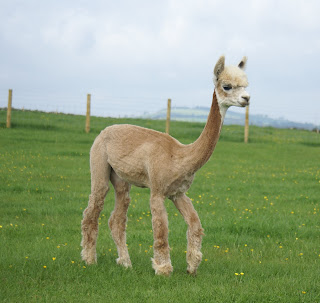 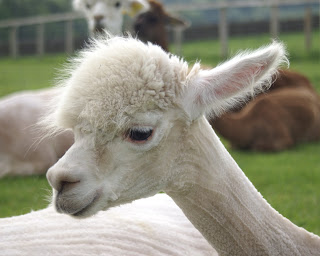 Beck Brow Tabitha
Paul has had to go back to work today after having last week on leave. We thought we had planned his week off well, not only to fit in shearing﻿, but also so he would see some births. It has been quite an eventful week...but not many births...surely today!! Paul did manage to get another field shelter completed. We are dividing up of the paddocks further. This allows us to have more isolation paddocks if required and also more options to accommodate small groups. We are constantly saying well that's it...only maintenance now...and then start another project...alpaca addiction at it's best!
Posted by Unknown at 08:38