Well, when I posted my last blog on Monday, I had hoped that the next one would be a baby announcement. Unfortunately not. Camilla is absolutely refusing to produce the goods despite a very active cria putting in some impressive kicks. Camilla just looks around at her stomach wondering what on earth is going on. She even jumps occasionally as if she has got a shock that there is something in there. I wonder what kind of mother she will be; One that forgets that she has had a cria? I wonder. Anyway we are just glad that she is actually pregnant. We will wait patiently Camilla!

Discussions around pregnancy announcements always cause some mirth around here when we reminisce about one of our ponies: Gypsy was lame and somewhat over weight so we were concerned about laminitis. However as it was possible that she was pregnant we wanted to ensure she received the appropriate nutrition. The young vet did an internal examination, announced that she could feel a hoof and that the pony was only about 8 weeks from due. So it was special rations for Gypsy and great anticipation; Friends with mobiles by their sides waiting for news. Two years later still no foal! Goodness knows what it was that the vet had hold of ?

We did however get a foal that year from Bramble. Rosie was born during a very cold night and was sadly rejected by her mum. We found her very flat and thought that we would loose her. Fortunately, she responded well under a heat lamp and we managed to get her to take a bottle. IgG tests showed that she had had her mums colostrum so she had a chance. Paul and I took turns at getting up through the night (every six hours) until she was a month old. She then managed to go for longer periods until she was eventually weaned at four months of age. As you can imagine Rosie is very special around here and even beats the alpacas in the popularity stakes where visiting children are concerned. 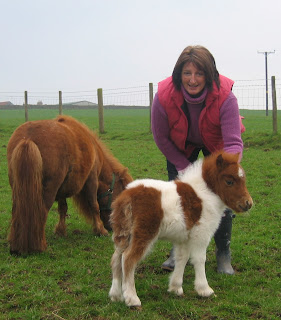 Rosie (as a foal) looking pretty good despite being bottle fed
Posted by Unknown at 14:52