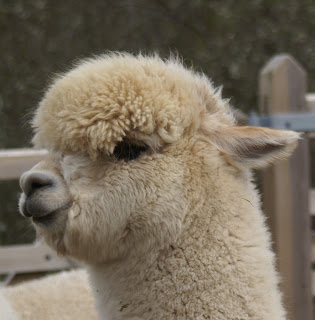 The three young boys: Jenson, Felix and Fidel were delivered to their new home at the weekend. Although they appeared totally unfazed by the move, I have noticed a definite lack of cuddles around here today. Almost Illegal (pictured) has now gone back to being the baby boy of Beck Brow until this year's cria arrive. He is rather a cutie, but not quite as lovey as little Jenson.

It has been all change here since the boys have gone. Today I have been rearranging the groups within the herd as we now have enough females to keep the non pregnant girls on their own . This means that feeding will be much easier. The young girls generally require less supplementary feed than the pregnant and nursing mothers, so it can be difficult to stop them getting a little overweight when in one group. 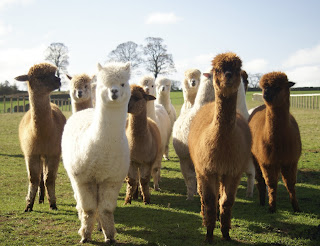 Dividing the groups went surprisingly well. For once everyone was paying attention. Minnie (left) and Holly (right) were nominated as the leaders of each group. It was only when the young girls realised that they were going back into the well grazed paddock that Pebbles wasn't quite so happy (below) 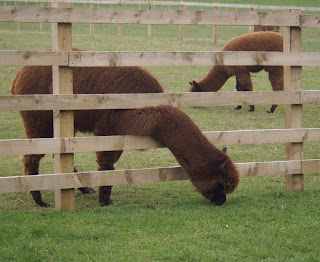 The boys have been put into the paddock next to the young girls in an attempt to generate some interest in mating. Willow (nine months) has so far been the only one doing any flirting!

Camilla, looks like she is bagging up at last. She has spent most of the day sitting about. So much so I managed to get a photograph of all of her, rather than just the usual passing head shot. She really could not be bothered to move which is not like her. 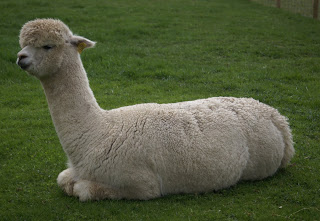 I am pleased to report that the little chicks are doing well. Mrs Hen is doing a very good job at keeping them safe from Mr Fox. She has been squeezing under a pallet of hay at night so should be okay. She has had then out and about all over today. Even taking them into the alpaca paddocks. As you can imagine they received plenty of attention from some very curious girls. 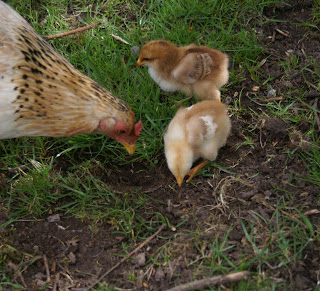 The chicks being taught to catch grubs by Mum.
Posted by Unknown at 17:31