The week seems to have gone by in a blur of orgling - for those of you without alpacas; this is the noise males make whilst mating. It obviously does something for the females who are induced to ovulate, but it does nothing for me. Think of someone yodelling whilst riding a moped, and you will get the idea.

Yesterday Paul went off on a seven hour round trip mobile mating with Explorer and Goldmine, and Gunsmith had two drive-by matings at home. Whilst the older boys are true pros (so much so that if Explorer could drive, he could do his own mobiles), Gunsmith wasn't as keen on his second mating despite a good rest in between. Then he cried longingly after the females had left. He has yet to learn that you have to take your opportunities whilst available!

Matings at home have been rather random. Paul and I sat down and compiled a list of who should be mated to whom and I have totally ignored it! One reason for the change is that Explorer is producing colour. Two very happy clients have had lovely apricot coloured light fawn females from white dams (I want one!). Thus Explorer has taken some of our best fawn females (yes I will get some white I know - just hopefully some colour too) Most of the black girls will go to Gunsmith as are most of the dark browns, but will we get any greys? I expect a couple of my randoms may just produce a multi...i think I was bored at the time!

One or two of the yearling females are sitting next to the pen whilst matings are taking place. I always debate about when is the right age for maidens, but we have had problems with excessive weight gain when larger girls are left until two years. We will weigh those sitting at the end of July, and make some decisions then if they are over 45kgs (I know some are 50kgs already!)

Another debate has always been...to cria shear or not to cria shear...well this year we are going to. I have been skirting fleece and some of our finest cria fleece are beyond saving, they are so full of hay seeds, moss and dirt. I am also finding some very small pieces of cardboard (only a couple of millimetre wide and 5mm long) this must be from either the National Show or Futurity. We do our best to keep the fleeces clean, the barn is swept every day, but it is an impossible task. It isn't helped by the fact our alpacas love the barn. I get up somewhere between 5.30 and 6am each morning to check the girls, and no matter what the weather, I find 75 of them in the barn munching hay and pooing (I suppose it has to be picked up inside or out!)

I have to say it is handy, as we usually do any husbandry tasks in the morning when they are already in. Cria are weighed every day for the first week, and then if they are thriving they go on to weekly weighing. Lambivac injections are given around 5 weeks before birthing, and cria are given theirs at 4 weeks and 8 weeks of age. Having them in the barn means that the girls and cria are very relaxed around us, and this is when I pick up any abnormalities such as jaw abscesses (we are treating two with Florfenicol at present). We also do our matings and spit offs when everyone is in, which often means you don't have to spit-off as the open girls sit next to the pen, letting us know.

On the subject of weighing...not only are we getting really good birth weights overall (lots between 9kgs and 11 kgs) they are maintaining their birth weight and gaining from day one. Healthy happy dams! We now have 23 cria on the farm. Eleven of those belong to Beck Brow. We have four girls and seven boys so far. Two more boys born for us this week... 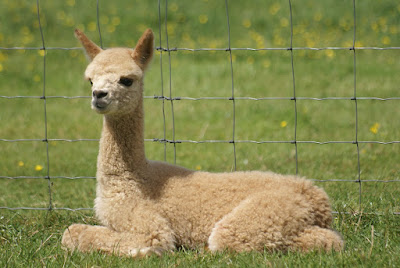 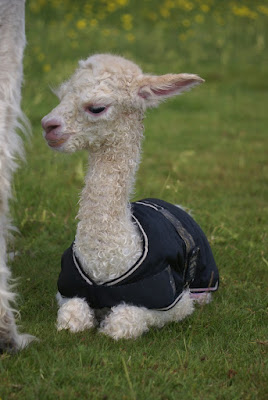 After some drive-by matings and a birth this morning, I have managed to get sometime in the mother and cria paddock this afternoon. I love cria racing...the fawn cria far right looks like she is going to hit the post... 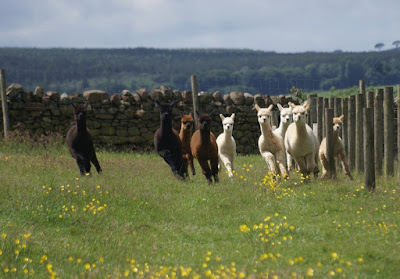 but manages to swerve... 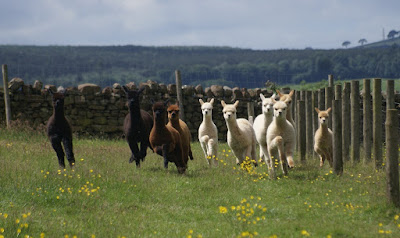 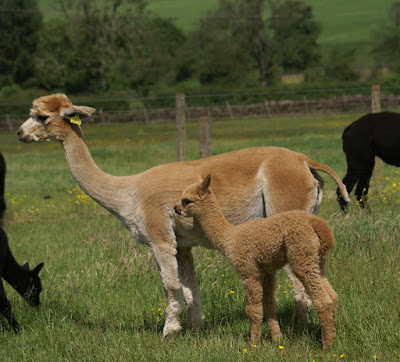 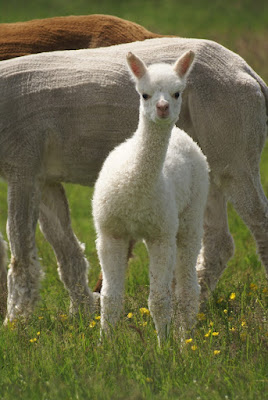 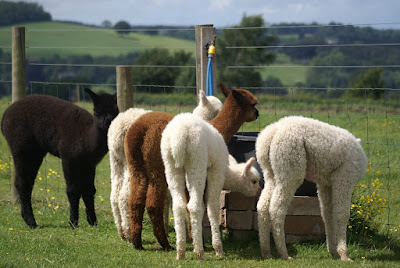 Enjoying a chill by the trough 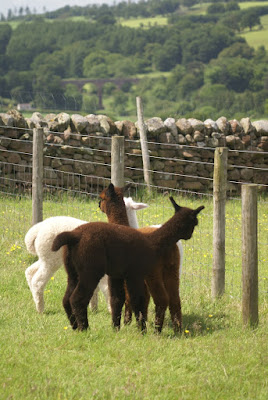 with the viaduct in the background

I do enjoy male cria (just as well) Beck Brow Game On (sire; Waradene St Patrick) is the mischief. In the space of half an hour he had started play fights with three other cria... 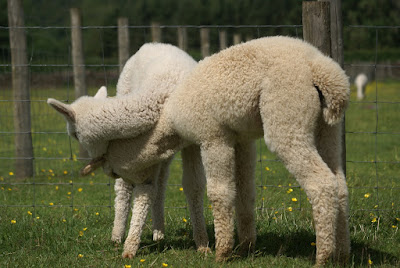 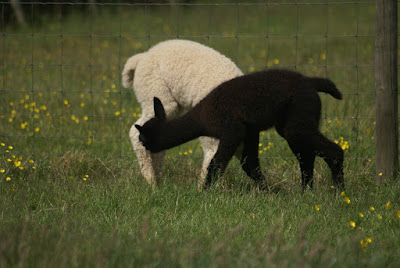 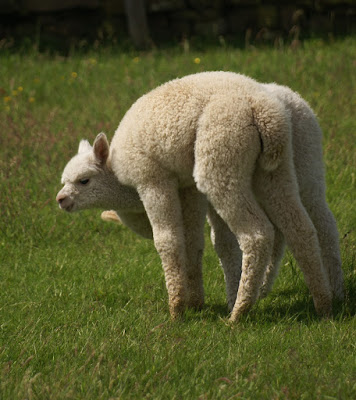 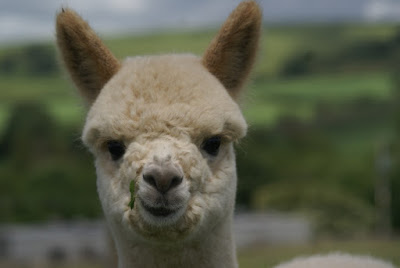 Beck Brow Roma (fine Romance) is looking like she may be getting ready for birthing soon. Roma rejected her first cria (Foxy Sox) who was bottle fed. She tried to do the same again last year but with the help of Sepia (homoeopathic remedy) she did eventually bond with Asterisk...will she remember that she loved being a mum when she tried it! 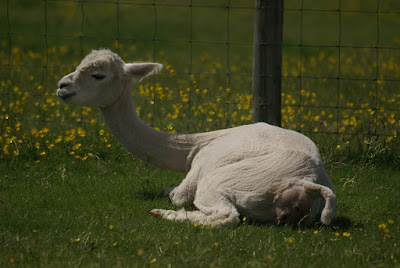 Despite talk of a heatwave...it is still windy up north...enough to blow a small dog over! 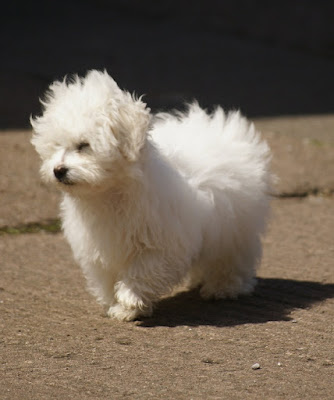