What to do for an Encore!

Well I thought we might have a birth today...the sun was shinning and Bozedown Magic Charm was looking a likely suspect yesterday. However, when Paul did the early morning check he came back to report that Morden Hall Honario was "twittering away to herself" . By 10am she was showing all the signs of early labour. Now this was exciting...not due until the 23rd...this is the dam of Supreme Champion Beck Brow First Edition...pregnant again to Beck Brow Explorer. Okay deep breaths...stand back...wait...keep calm and carry on.

However, things weren't really progressing, Honaria never stood to push, but was very fidgety and was looking a bit uncomfortable. After an hour of her attempting to push now and again, we went to get the Hibiscrub and obstetric gel. On return Paul declared that a bottom had appeared...yes completely breech with the legs under in a crushed position. We gently helped Honaria and the cria slid out, still attached to the cord. Then Honaria stood breaking the attachment. Paul quickly swung the cria, which obviously had fluid on it's lungs. As the cria was now looking blue and showing little sign of life, Paul gave mouth to mouth resuscitation. On the third administration, the cria started to breath.

The cria was given jump-start, glucose, and was brought in under the lamp and warmed with a hair dryer. Cord now sprayed, we had chance to see, that we have yet another female (six in a row for us). We called the vet, to check that Honaria hadn't suffered any tears. Also, so that  if we needed to administer bicarbonate (given I.V.) for acidosis, due to the cria's breathing at birth, it was on its way.

It looks like good news around. Honaria has no tearing (I have given her pain relief and long acting Amoxypen...and as I am told she may retain her placenta, Oxytocin). By the time the vet arrived the cria was looking fine. She has now had 2 x 50 mls of cows colostrum, and doesn't appear to understand what all the fuss was about!

She is showing signs of being premature so will need a close eye...but phew for now (we now have Doxapram on farm, an aid to induce breathing and a resusitator on the shopping list...well done Paul) 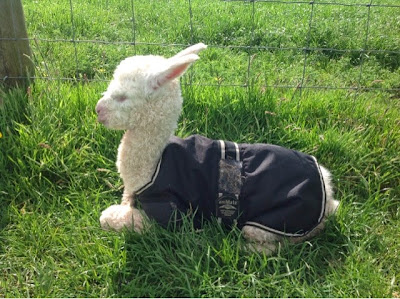 Looking very like her sibling, First Edition (albeit a cream version) we have decided to name her Beck Brow Encore...we did consider Bottoms up (and worse) but decided against it?

We had another female born on the farm yesterday, this time belonging to Amanda (Florens Alpacas). Blackmorel Vale Butterscotch presented another gorgeous Waradene St. Patrick "look at me" cria, named Florens Juno. 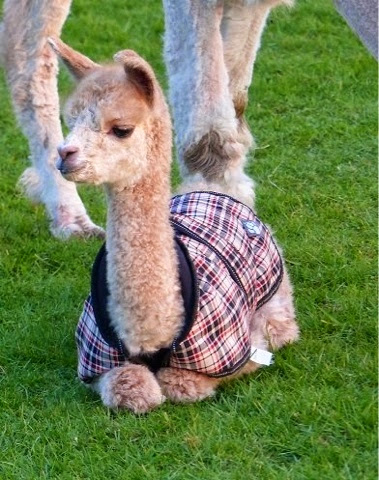 It's been another busy week with mobile and on-farm matings. A great opportunity to catch up with folks, not what you could really call work! We did manage to include some proper social activity, when we joined Viv and Niamh of Oakton Alpacas, in the evening celebration of their wedding. We had a lovely time.

It was back on Sunday, ready to make a special delivery of four boys to their new home. I was going to drive, but as Robyn and Craig were available to farm watch we decided to go together. The boys have gone to a fabulous new home, and it was lovely to be able to spend a little time there. 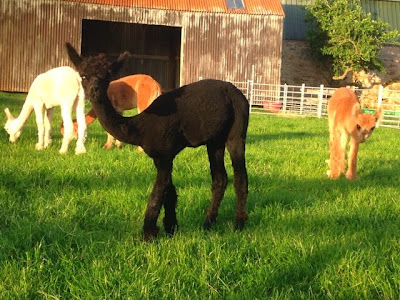 The boys at their new home


Robyn and Craig took Hettie for a walk whilst on the farm...it wasn't until they returned that they noticed what was in the parcel shelf... 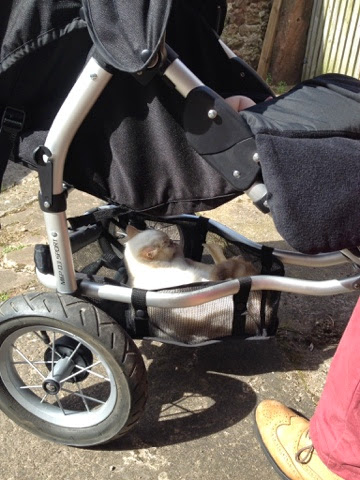 Astor enjoying a trip out!


And finally for Claire...a photo of our granddaughter Hettie (Henrietta Rose) 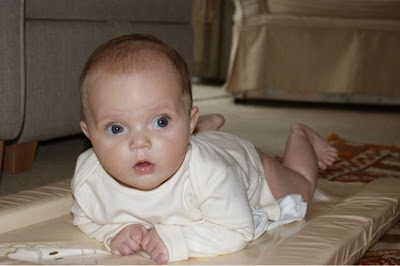