It wasn't the easiest start to 2011...with temperatures as low as minus 17 degrees it meant plentiful supplies of sugar beet for the alpacas, and plentiful layers of thermals for the humans. Velvet (our Jocker...that's a Jack Russell / Cocker Spaniel cross...used to be called a mistake, but is now of course trendy...although she still gets called a mistake round here fairly often!)... got herself plastered in January, after a run in with a post van...this of course was only the start of Velvet's many mishaps in 2011! 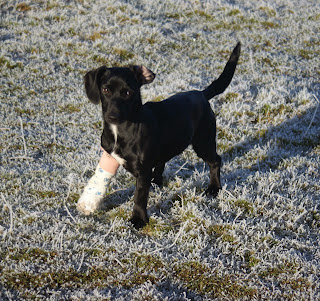 Velvet
We did escape the cold in February with a holiday to Kerala in Southern India...where I celebrated my 50th birthday (50 and don't I know it...never mind crying at sad films...I was crying at Professional Master chef last week!) ...although we didn't visit Delhi on this occasion... I did still manage to acquire the belly...and was more than happy to be back in Cumbria with our alpacas by the end of it.... Especially as we returned home to be greeted by a lovely new farm sign... 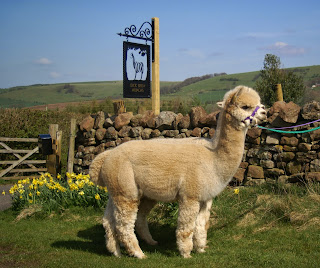 A present from Robyn and Craig (the sign not Waradene St Patrick...they are generous but that might just be a bit much!)
Late March and April were unseasonally warm...the grass started growing much earlier than is the norm...and the alpacas were getting fat...(little did we know this was going to be our summer in Cumbria...as it rained for most of July and August)...the alpacas were rather warm in their winter fleece...but made the most of the spa facilities... 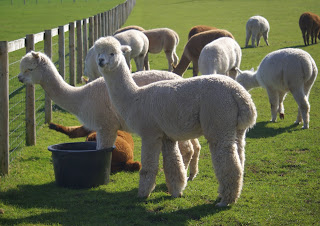 Cambridge Camilla hogging the foot spa with EP Cambridge Lady Gaga looking peeved!
Spring brought with it field maintenance, more fencing and the building of additional field shelters. Hopefully this will be it for a while at Beck Brow, and we will have a year off from any more alterations in 2012...less expenditure and more income is the plan...and on that subject.... 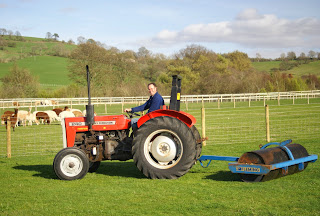 Paul enjoying playing (boys on tractors...can not be called working!)
Yes... the subject of spending...some things are just too tempting to resist...and Inca Van Dieman Chaska was certainly irresitable...a beautiful dark fawn female; with such coverage, density and strength of bone that she could easily have been mistaken for a macho...if it wasn't for her having one of the prettiest faces and the most doe like eyes you have ever seen...add to that a pregnancy to Neptune of Houghton...Waradene St. Patrick got lucky and another female was added to his harem. 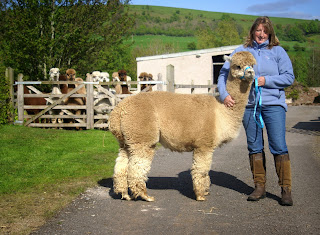 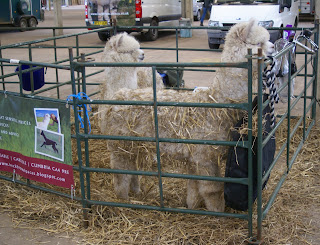 Beck Brow Explorer at The National Show .... Yes Explorer you do have to go back in the ring! 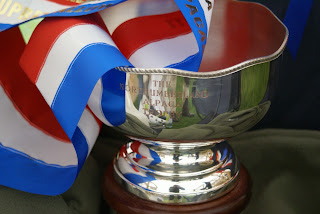 Beck Brow Explorer gets Supreme Champion at Northumberland and Westmorland Shows
In amongst our travels on the BAS show circuit; to local shows; and to The World Sheep Dog Trials...we had of course the birthing season to fit in...not our easiest with a number of cria deciding not to come out legs first. Beck Brow Magellan (dam Chaska above)...was the first of out 2011 cria to be born...not fawn as anticipated...but a little cracker all the same. 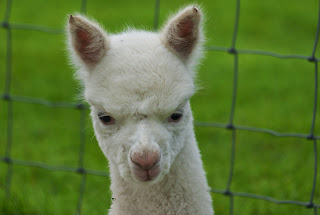 Beck Brow Magellan
Of course we were excited about the anticipated arrival of each of our cria...but probably none more so than that of EP Cambridge Lady Gaga...the reason of course was that this was to be our first, and only cria (for 2011) of Waradene St Patrick of EPC. Snooty Boots (as we named her) was supposed to be our last born cria of the year...however Lady Gaga had other ideas and decided to deliver at under ten and a half months gestation. Luckily, Snooty Boots, was a fighter and was up and away after a couple of days.
Part of the excitement was about what colour would she be...we had especially chosen St Patrick based on the strength of colour in his genetics, as well as his presentation...thankfully, we were not to be disappointed...Lady Gaga is beige...but Boots popped out the exact same colour as her sire...and the absolute spit of him too... 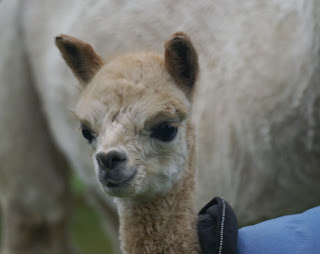 Waradene St Patrick...can't get out of that one Paddy!
So with Lady Gaga passing the finishing post early, and Silverstream Hoity Toity taking her time; Beck Brow Quintos ended our birthing season in early September. Our final tally (unfortunately we lost 2 cria this year including Minnie's Max) is six females and four males (excluding alpacas on livery) 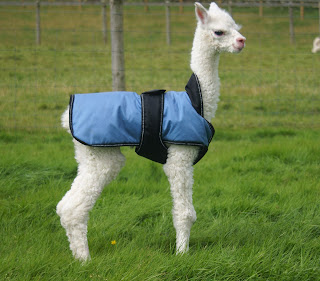 Beck Brow Quintos
2011 also brought our ideas for our Beck Brow Alpaca Shop closer to reality. It has taken some sweat (nearly tears but not quite...I save them for when watching TV) and a journey on a massive learning curve...but together with the help of some expert craftsmen, we have some beautiful throws and scarves...just the beginning of our range (I just wish fleece sorting was as exciting as the finished product!) 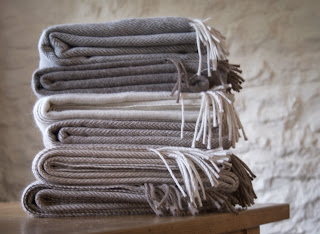 Our first Beck Brow Alpaca throws
August Bank Holiday was the date for the sale of the prize winning Blueberry Alpaca herd from Cumbria. The auction was packed with breeders from all over the UK present...we again added to our core herd with three females... including the highest priced girl (Best of British Champion 2011 at Northumberland  Show) and the third highest priced female (a black) 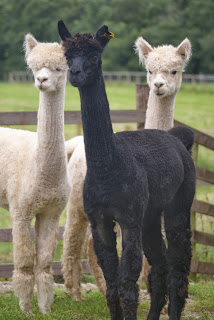 The Blueberry girls...now all pregnant to our own Waradene St Patrick of EPC
Velvet was back in her sick bed in the autumn...after a spell in doggy Intensive Care post the ingestion of poison (fungi we think)...it did take a couple of weeks before she was back to normal...thankfully she managed to come down from the house roof the following month unscathed! 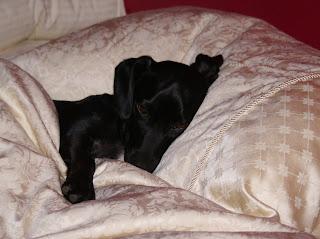 
Our final additions...and these really are our last alpaca purchases for some time...arrived at Beck Brow ready to face a Cumbrian winter. We decided, after his success on the show circuit, that Beck Brow Explorer deserved a special reward...two in fact...in the form of Easter-Wood Metisha with Easter-wood Adelle at foot...these two females have Australian genetics to die for...and super fine fleeces...we will have some time to wait but they have been especially chosen as the icing on Explorer's cake...we will see (that will be 2013!!!) 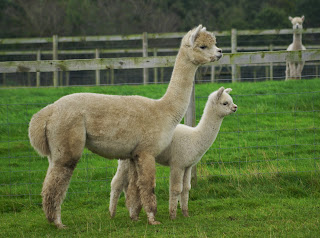 Easter-Wood Metisha and Easter-Wood Adelle
It has been a jam-packed year here at Beck Brow...at times exhausting...but mostly exciting. We have had alpacas go to new homes, and others who have new owners but are still at livery here...we also have lots of new additions...all chosen for their individual qualities and what they will add to our herd...who have all settled well...we end the year feeling we have achieved a great deal...but most of all we have fields full of healthy and happy alpacas...and after all that is what it is all about.
Posted by Unknown at 18:46