The results of the experiment...

It has taken a little while...as all good research does...but I believe that I now have enough evidence; I can now reveal that the Paul Poo Picking Experiment has been a success. Some of you may recall that Paul has a very strong aversion to operating the Poover...on the few occasions that he has been persuaded to participate single-handedly...I feel sorry for the alpacas...all that shouting and swearing, the blaming of the tools...they are not used to it.

Well that is all in the past...The Pavlov's dog conditioning is working a treat (you will recall that the dog was conditioned to associate food with the ringing of a bell and eventually the mere ringing of the bell had the dog salivate)...in this case I had Paul help me with some fleece sorting...one hour later he decides it would be better if he did some poo picking whilst it was dry...now all I have to say is 'fleece sorting' and Paul is the paddock poo picking quicker that Velvet after a rabbit...the paddocks are pristine!! 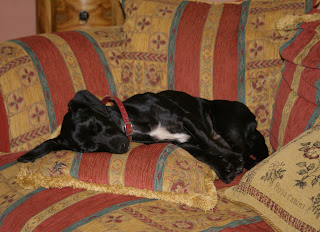 Velvet
The reason for the fleece sorting frenzy is because we have managed to negotiate at slot at the Specialist Spinning Company . We have decided to drive down to the mill in Banbury, Oxon so that we can discuss our requirements in person. With a five hour journey to endure I have decided we may as well as much fleece as possible; 350 kilos weighed last night...I wonder what I'll have done by Monday!
Thank you for all your comments on the last blog. Magellan did indeed undo the cycle chain but didn't in fact make it down the pub (I think seat adjustment was just a step to far). He really is very entertaining and soooo smart. Yesterday I was leaning over him to pick something out of his fleece...(he just stood there despite the tangle)...when he carefully pulled down the zip on my fleece...okay not that smart...but then he pulled it up again...very smart! This morning's trick is to weigh himself...he has worked out that if he steps on the scales they light up...love him!
I won't start the whole debate about cria handling again. I think we covered that one  in a blog earlier this year;  http://beckbrowalpacas.blogspot.com/2011/01/muddle-of-explanation.html. We continue to handle our cria regularly in an appropriate manner...we have had no behaviour problems...in fact quite the reverse our alpacas are confident and don't mind being handled, which results in a stress free environment for all...Explorer the only male we kept from last year's births is very respectful towards me despite plenty of cria attention and medical intervention. 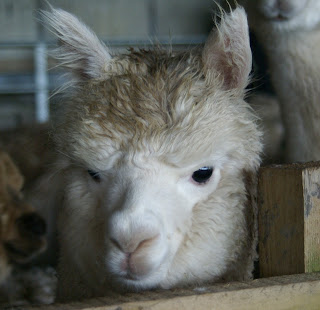 Beck Brow Magellan waiting for his breakfast this morning.
It really hasn't been the weather for photos...well not fluffy photos anyway...here as some bedraggled alpacas from this morning. There was obviously something interesting happening up the lane (probably Velvet making her escape...she could have starred in the Fenton you tube clip...no bother). On the right are the girls from Weight watchers and on the left are the mums with cria.﻿ 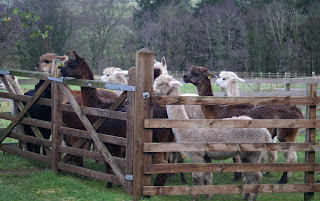 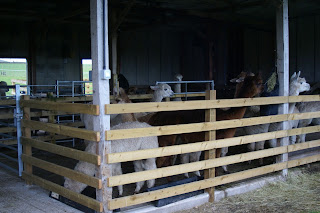 The nursing mothers...not bothering to venture out.
Well must be off I have fleeces calling...Paul seems to have disappeared whilst I have been blogging...I can now hear the chain saw in the wood...he obviously has done poo picking... and thinks if he his far enough away he can avoid me...we will see!
Posted by Unknown at 11:31