It was an alpaca packed day yesterday. We had visitors in the morning and the afternoon. Our morning visitors (whom I forgot to ask if they minded being mentioned on the blog so will keep annonymous) first came to visit us last week, and had left with lots to consider and a selection of our yarn. They returned yesterday with some beautiful knitted garments (how do people knit so quickly!) and what I recognise as the start of an alpaca addiction. It is really encouraging when you meet future breeders who are so interested in learning all that they can about health and welfare, as well as having sound breeding plans.
Our afternoon visit had been planned for a little while. Lynn and her son Jack (who kindly read this blog) were travelling between Scotland and Dorset and had asked if they may pay us a visit. Caramella and Minnie did the usual meet and greet. As Lynn is a Sister working in critical care, the conversation was a mixture of alpaca chatter and the state of the NHS!
It was then spit-off time (yes we are running a day late again). Camilla sat to be re-mated ...which has got me into trouble with Paul...(but on the up side at least St. Patrick didn't try it on with me)... Paul is not best pleased because I strayed from our usual 21-day post birthing schedule. Camilla had been sitting...it was 15 days and it was too tempting. Our 21 day success rate is very high and I should stick with it. The problem with mating earlier is that the female often spits-off at the ovulation spit-off and then sits the following week (as has Camilla). So instead of gaining a week we lose one!
Holly spat-off at her pregnancy spit-off so it looks like Almost Illegal has his first pregnancy. He had a date with Bonita last night and was a perfect young gentleman...he is quite romantic...Amanda and I watch going ahhhh...strange behaviour I know.
Now you might think that would be enough action for one day...but no...the hay had been baled and was ready for the barn. We only put aside 2 acres this year and managed 230 bales of really good looking hay. We have quite a bit left over from last year so we are planning to donate some to an animal charity...only a little sigh was heard from Paul...good deeds always end up increasing the workload...when can we deliver? After that it was a take away from our local pub...homemade steak and ale pie...yummy. 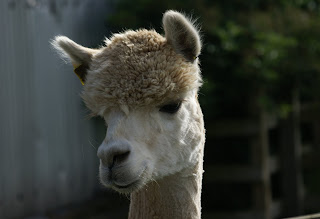 Waradene St. Patrick of EPC...looking chilled after a date with Camilla 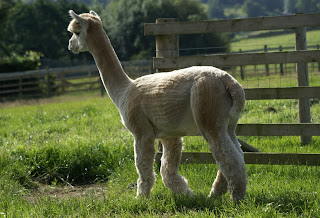 Strolling off to enjoy the rest of the evening... 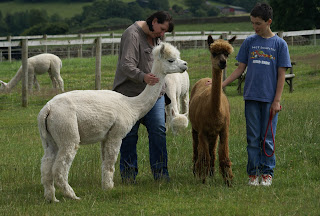 Lynn and Jack with Minnie and Caramella.
Annoyingly the van is still playing up so is back in the garage. It does sort it's self out by turning the engine on and off, but not ideal on the moterway! Paul had booked a day off work to take the van and trailer down to EP Cambridge in Wiltshire on Thursday, but the trip has now had to be posponed.﻿
Posted by Unknown at 07:37