It's good news!...Nancy (a female belonging to Robyn and Craig) had a Hollywood cria yesterday morning, and in text book style. 10.30 am, straight forward birth of a male cria weighing 9.5 kg, who was quickly up on his feet and drinking. Nancy is an average sized female and this was her second pregnancy so it was rather a test to see if everything went well. We are so pleased, as Hollywood is producing some lovely cria, really well conformed with plenty of density, and he really is producing colour. We are now starting to blame the early spring grass here and the constant rain; we have never had so much lush grass. Two more Hollywood cria to come, both decent sized females, we will see. 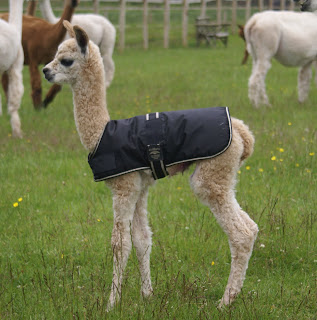 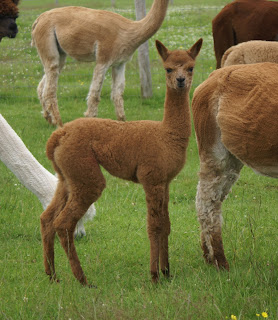 I know she has featured for 3 blogs in a row...but just to confirm the colour and confirmation attributes; Beck Brow Sophie...again!

I did go out to take some photos of  Rumour and Synergy (who even I think like rather alike...both EPC Top Account of Fowberry cria) but didn't get past Magellan (it is impossible to get past Magellan he is so friendly) before it started to rain. 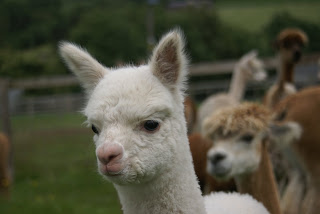 Beck Brow Magellan
I probably shouldn't put in into print how pathetic I am...but always best to be honest I feel; Last night I decided I really needed to separate Explorer from the girls. Now, he has long ago abandoned his Mum so no problems there. What is the problem is his attachment to Lucie...and visa versa...they adore each other. Lucie still sticks with Nancy her Mum, so now we are a group of four: 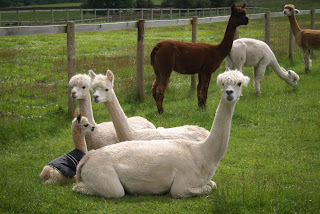 Nancy, Alfie, Lucie and Explorer (nearest fence)
Explorer has even been helping protect Alfie (that look on their faces is due to Velvet approaching). So what is the issue?...why the need to move him?....Well for most of the time it is brotherly sisterly love...that is until Explorer hears St. Patrick orgling...then his thoughts turn a little x-rated. So did I move Explorer?...I did for the whole of 30 minutes...he went in with our two wethers...but he was so distraught shouting for Lucie, I couldn't stand it and gave in...PATHETIC! I am going to have a move around and put him in the paddock next to the girls with the wethers. I know it should be out of sight out of mind, but I don't think it was going to work.
Posted by Unknown at 13:13