I slept in this morning; 08.30 hours was stated by the bedside clock...I am obviously putting in too many hours at the hospital...no time for a shower,﻿ it was straight out to do the feeds. Me?...I grabbed a cold Cumberland sausage from the fridge (I specify Cumberland as I do have standards!) and started the jobs for the day. It was my intention to come back in for a shower after feeding but it was such a beautiful crisp morning that I decided to carry on with a few jobs first...It is now 16.30 hours and I am about to get in the shower...the alpacas come first without a doubt!
Poo picking has been a pleasure today (look I have been on nursing duties!) the crisp morning turned into a bright sunny afternoon. The paddocks are pristine, not a bean of poo was to be seen by the time that I had finished. It was good to see the alpacas looking fairly clean and dry for a change (cria excluded from that clean bit). Lady Gaga was looking particularly regal today. She has this fabulous way of looking down at you but looking extremely feminine at the same time. 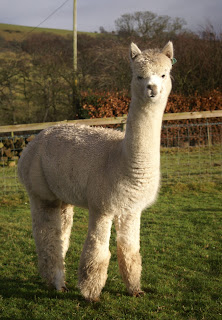 Yes Lady G...we know that you are special! 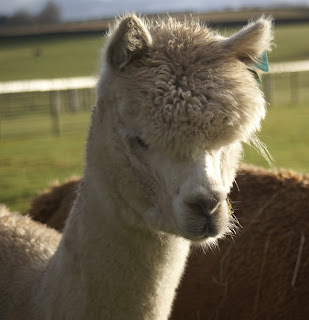 Look at those eyelashes....she could only be female!
The dogs; Velvet and Tyke have also been out all day enjoying the fresh air. Velvet especially just loves being around the alpacas and Willow is equally taken with her. 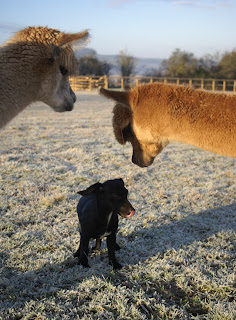 Willow (right) and Nina close in on Velvet... 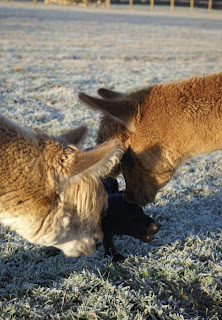 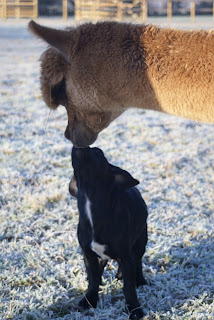 ...Velvet goes for 'love you too' approach!
It will be back out for the evening feed after a quick shower. I am not going to be very popular tonight as I remembered at around midnight, whilst I was tucked up in bed, that I had forgotten to put the water on the sugar beet...so no beet tonight for the girls...whoops.﻿ They will have to make do with peas and beans. Talking of which; the weanlings are obsessed. Small amount of peas and beans as a reward for walking on the halter...appears to be doing the trick.
Despite me saying that boys are easier to halter train than girls; Roma was the star today. Roma is not only very willing but does it with style. Explorer on the other hand likes the trip out but grumps along. Some 'head up and walk like a winner' training to be done before the show ring. Bev and Andy's boys (Finian, Noah and Kenzie) also had an outing. All now seem to be enjoying the attention or is the peas and beans!
Posted by Unknown at 16:41