Velvet is doing fine...thank you for your comments...she is trying to run around now. So long as she doesn't give herself a secondary head injury﻿, by tripping up over the bandages, she should be okay! (no breaks Jayne...bendy young bones probably saved her).
She is back fighting with Sam the cat. It all turned a bit chaotic this morning when he swiped her and got his claw caught in her bandage. An amusing sight; a cat and a dog hopping about together on three legs trying to keep up the wrestling. The alpacas didn't know quite what to make of her this morning (out after the post was delivered!). Initially the girls went running off when they saw this strange creature approaching...strange; they obviously didn't recognise her in her hobbling state. The weanlings were also a bit bemused but much braver: 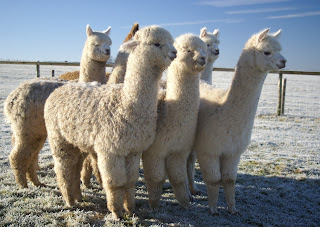 The weanlings checking out Velvet (off camera): Front; (L-R) Explorer, Roma, Lucie. Back; Kenzie, Parisien, Tabitha (Roma has had some fleece trimmed from around her eyes despite appearances) 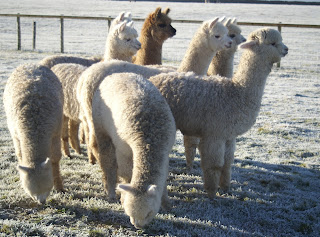 Roma did oblige by showing off just how dirty her neck fleece is (click on to enlarge). She seems to have acquired lots of moss in there amongst other things. Dirtiest alpaca at The Futurity? Competition for Greeves Rosemary? 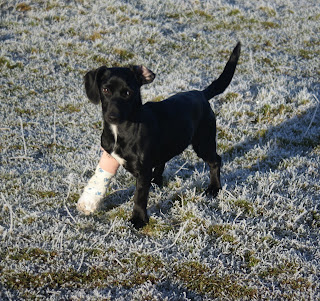 Velvet...note dressing still in place without plastic collar!
Paul and I did some condition scoring last night. Despite the dreadful weather we have had, we were pleased with the results. Phoebe is just slightly under and Pebbles is definitely over ideal, but everyone else seemed spot on...better than this time last year when we were feeding up a few of the girls. The only things that we have changed this year from last is to feed sugar beet at night (instead of morning and night) and feed peas and beans in the morning. We also introduced the specific camelid mineral drench (a pain to give but maybe worth the extra effort). We also have weaned a month earlier this year.﻿ There are too many variables to be scientific but we will continue with the same regime at present.
I have had a call from Paul at the Halifax Spinning Company this morning. He just wanted to finalise the quantities of each shade before starting the processing our fleece into yarn. We decided to blend all the black with white to create a silver grey and  settled on a blend of 30/70. This means that I will not only be using up a lot of my white, but I will also be ending up with a large quantity of grey, but I am happy with that. This batch of white, grey, fawns and browns will create over 200 kgs of yarn finished as 1, 2 and 3 ply. Very fine but it does create a beautiful end product. I can't wait to see it.
I am off walking with the girls this afternoon (that was meant to include Velvet, hence we are now only going out for a short walk so not to leave her for too long). It is the perfect day; frosty but sunny. I am sure it will finish with food in the local pub. Hopefully a better day than yesterday.
Posted by Unknown at 12:51