The snow began to fall at around 10 am. I had already started the poovering so I carried on; my hands were freezing; I had an inch of snow on my head; my rear... jumping on and off a snow cover quad...well﻿ best not think about it! I was determined...I was going to collect it all before it disappeared beneath the snow (okay, I know at minus 4 degrees nothing will be living in the poo...and this just confirms that I have pristine paddock syndrome...although not officially diagnosed). Anyway, after soldiering on to the point of near pneumonia the snow stopped and hasn't returned!
I am ready. As well as the usual supplies of Camelibra and Fibregest, I have enough oats, sugar beet and peas to last until the end of February, if not March. And today I have been out and bought some serious gloves...well seriously expensive ones, designed for visiting the Arctic or such things...minus 10 is my normal crying point so we will so how they do. Seriously...I am not complaining...I am sure it will come our way, but we have escaped with ice rather than snow, and a comparatively warm minus 3 degrees today.
I threw some hay out for St Pat and the boys (at minus 3 we can assume that eating from the ground will not be a problem!). The five boys live in harmony for most of the time, with food being the only battle ground. St. Pat has quickly established himself as the leader and does get a little bossy around feed time. As you can see in the photo he has managed to hog the biggest pile of hay. Five x 1-meter long troughs, with a minimum of a meter between them, seems to have ended most of the disputes. Long may it last. 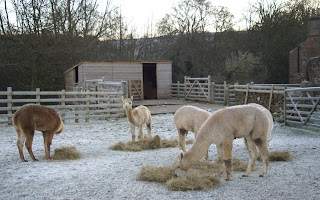 I haven't managed to get any decent photos over the past few days. In part because the girls stay in the barn for much of the time; and in part because I have been too busy shopping and lunching. Apart from the last minute stuff I think that I am almost there now. With the threat of the big freeze I have two freezers packed full of goodies, just in case ( in case of what?...in case we can't get out for two months is Paul's retort!). I have accepted a little help this year with the Christmas dinner preparations. Mainly with the accompaniments that take up so much time.They kindly offer every year and I normally like to be independent...however...with the thought of having to deal with frozen troughs and frozen pipes on Xmas day this year I have given in...it would be churlish not to...thank you Marks and Spencer...
Posted by Unknown at 15:39