I woke up this morning buoyed by the thought of the predicted big thaw...would it be warm enough to take off my gloves...remove one of my vests...and more importantly would the downstairs loo be back in operation? The answer to all three...No..No... and No! It was still minus 5.5 degrees at 11 am this morning; better than minus 12.5 but far from thawing out. We have just managed minus 3.0 so maybe we will get above zero yet. I did notice on the lunch time weather forecast that Carlisle was the only place with a - in front of the number, and although just 10 miles away, we are always a few degrees cooler than they are.﻿
Looks like I will be able to try out some of the recommendations for keeping the water from freezing over, sooner than I had thought (Many thanks for all your comments and advice). I thought that Shirley's idea of adding vodka to the water buckets had real potential, however, after further consideration I feel the chances of Hoity Toity becoming dependant are fairly high...she isn't a girl with much restraint. I will try adding a drop of oil to one of the buckets to stop the water freezing, as suggested by Hilary, and see how it goes down with them. I wonder if cod liver oil would do the trick and give them shiny fleeces too!
At least the alpacas have all been out today. The hay supplies are very popular with adults and cria alike. If this winter and last are to become the norm, I think that we are going to have to invest in some hay dispensers for the paddocks (normally we have plenty of grass so they only eat the hay in the barn when it is raining or at night time) 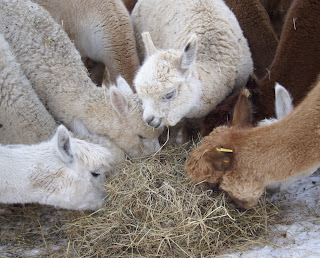 Nutmeg holds her own in the hay scrum.
Amanda, whose two girls (Caramella and Stanstead)﻿ arrived with Lady Gaga over two weeks ago, has only managed to get to see them once since the day they came, due to the lack of salted roads where we both live. The girls have all settled in really well...I think it was the sugar beet that helped win them over so quickly! 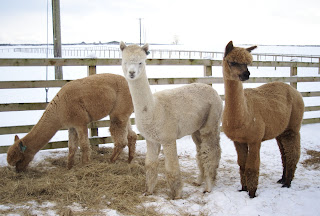 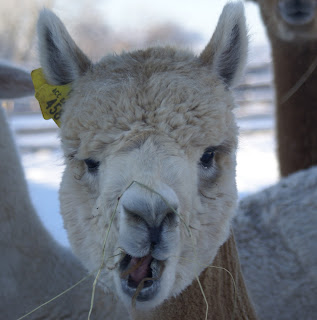 Even St. Pat has been out today...I caught him mid-chew...I am sure he would not be very amused to see the result...but very cute ears sir!
One last photo...apologies for the quality but I thought it was never the less rather amusing; I caught Sam the alpaca cat and Velvet catching the sunshine that was coming through the window into the snug this afternoon...you may have to click on to enlarge but ...Sam is looking mighty cross that Velvet has bagged the remote control!﻿ 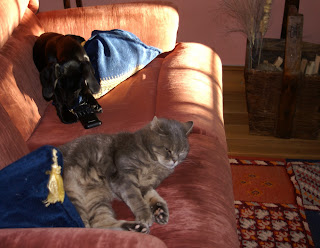 Girl gets the remote...it must be that the cricket is over...anyone know who won?
Posted by Unknown at 15:00