With four girls likely to give birth very soon we are hoping for an exciting week ahead. Galaxy is still holding on, and is looking like she may get overtaken by Bonita who has been humming away all day today. Also in the running are Phoebe and Katkin, both were under 11 months last year, but have already passed that milestone, thankfully.

I really could do with some colour for my cria photos now. However, as Ben rightly points out; the white ones go nicely with the buttercups!


I keep trying to get a photo of Explorer that doesn't have him looking like he has been through a war zone. Although, his wounds: pieces of fleece missing from his neck; matted fleece on his face from a watery eye; and gunk stuck to the end of his ears, are all evidence of what the little fella has been through.


This morning I managed to catch him in profile (below right with Kenzie left) and was pleased to see that he has inherited some of Camilla's elegance. 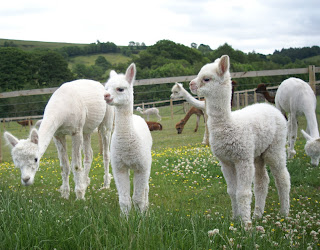 Well maybe not so much the case front on; Not quite the elegance seen in profile! There is certainly no mistaking what sex he is! 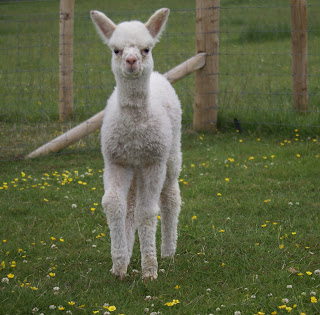 Explorer...definitely all male!
Kenzie however, does look very sweet from all angles, but he does hold his own in the neck wrestling challenges despite the opposition looking like a rugby prop! 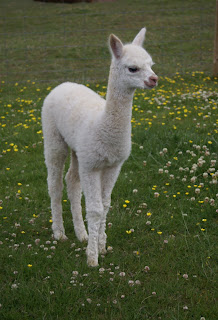 Kenzie...looking refined!
Posted by Unknown at 17:26