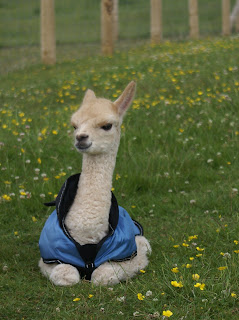 Well I predicted a busy week for births this week. What I didn't predict, was that it would be Katkin and Holly who would do the delivering.

Holly had a lovely little boy at 323-days gestation yesterday morning. He weighed in at 7.5kg and was a little slow to stand and slightly down on his pasterns, but was up and away after a couple of hours. Holly is a fantastic Mum and great milk producer. This morning Finian tipped the scales at a healthy 8kg.
Finian is a fabulous golden colour. Both Parisien and Finian are Legacy of Purston progeny. Legacy, although white, consistently produces coloured cria from coloured dams. A rather good trait  for us. We will be using Legacy again over Holly in the hope that she produces a golden female for us next year. This is three boys in row for Holly!

Galaxy is still walking around with her tail horizontal and has been bagged up for weeks, but still no action. This year expected due dates seem to mean nothing. It keeps us on our toes I guess. Holly and Finian...still getting the hang of balancing!
Camilla and Explorer are having a trip to Yorkshire tomorrow. Camilla has a date with Top Account of Fowberry. We are keen to have some of Top Account's genetics in our herd and have had him in mind for Camilla for some time. After this year's efforts we think that she certainly deserves the best.
Posted by Unknown at 13:46