Gee whizz...my body is too old for the life that I lead...I thought I would write a blog in order to justify a sit down. Trouble is it's all a little bit groundhog, my blogs are blurring into one; births and matings!

However, we have had a bit of excitement with the birthing. On Sunday morning, wide awake at 5.30 am..I decided to don my pyjamas and check out the birthing paddock. Well just as well I did. All the alpacas were in the barn as usual, but there sitting kushed in the paddock was a little black cria. It took a second or two to register that this belonged to Beck Brow Snooty Boots (sire Waradene St Patrick).

I ran for the birthing box, and such was the excitement that I nearly tripped up when the ribbon of my PJ bottoms came undone, and my bottoms ended up at my ankles (luckily we have no very close neighbours). The cria was cold (33 degrees) so he was promptly brought in and warmed with a hair dryer. By 7.30 am he was suckling and bright as a button. And I went indoors to put on some more suitable attire (by this point I needed warmed with a hair dryer too).

Last year we decided to mate Boots with our black male, Viracocha Black Sabbath, as we knew St Patrick, her sire, could produce black. The trouble was, Boots went berserk at the mere sight of Black Sabbath. So rather naughtily we tricked her, using Explorer (white) to get her to sit, then swapped the males. I did have a niggling concern that if she had a black cria, would she reject it. Thankfully she loves him. She does get a bit confused now and again and goes looking after white cria, but she is very proud of him. A beautiful blue black male from a lovely fawn dam...could be exciting! In recognition of his dam being called Boots, he is to be named Beck Brow Jimmy Choos. 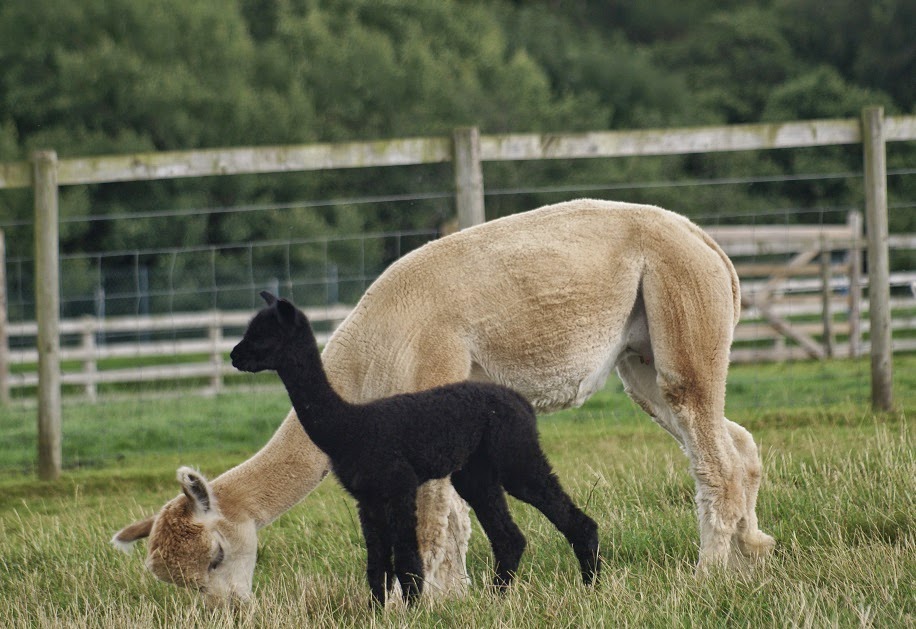 Jimmy and Boots on day one 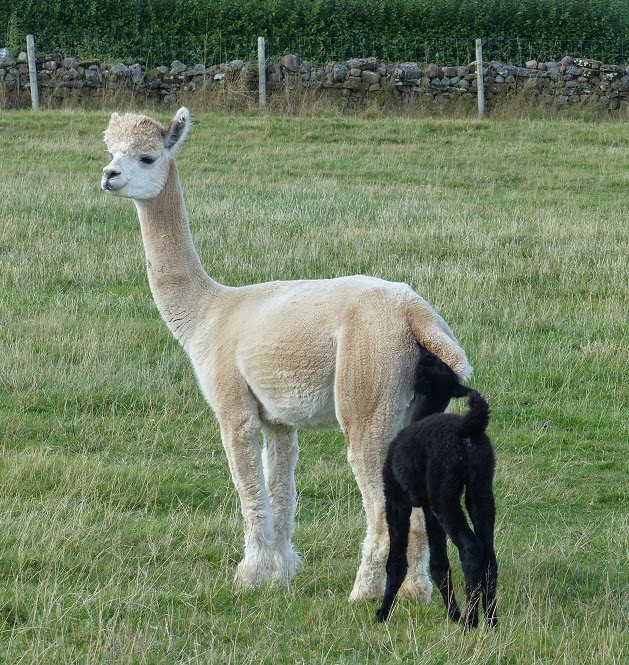 and again today...Boots always tries to look elegant whatever is going on! 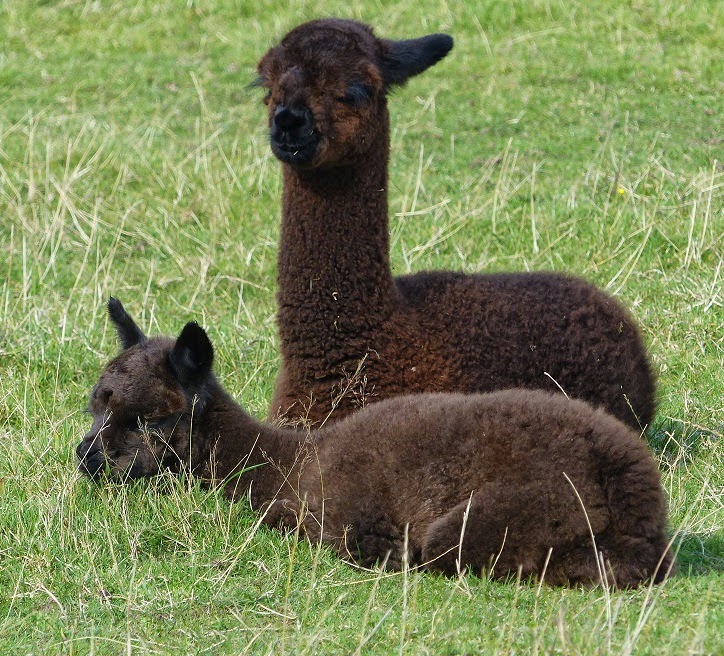 Yesterday it was all go, with two births and a farm visit. In the morning Cambridge Scarborough gave birth to a blue black male, sired by Black Sabbath (below). I have yet to think of a name...not sure about Skeggness? 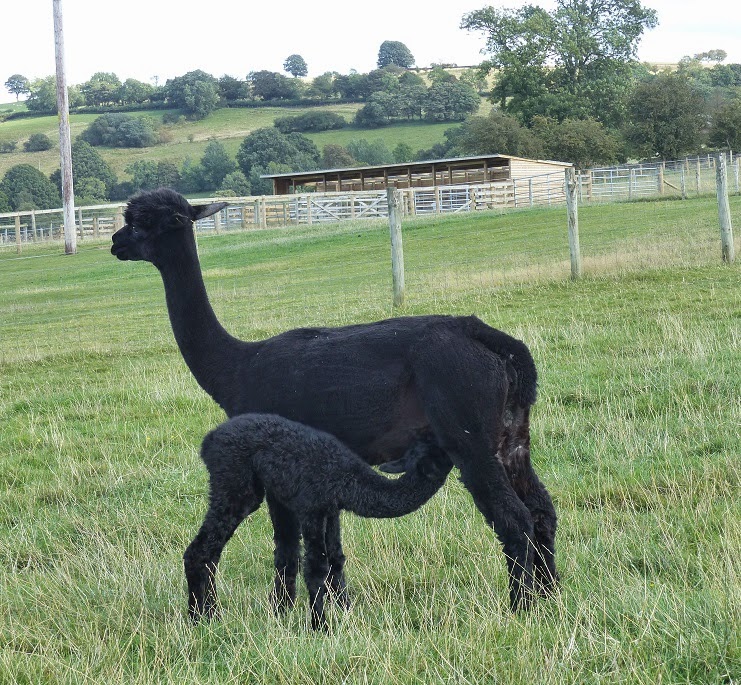 and in the afternoon Ep Cambridge Sparkle (agisted) gave birth to a Beck Brow Explorer daughter (below at 3 hours old). This little female will be going to Switzerland in the spring. I have never seen a cria born as lively as this one. She was trying to stand with her front legs before she was completely out. A proper little character with a very curly fleece. 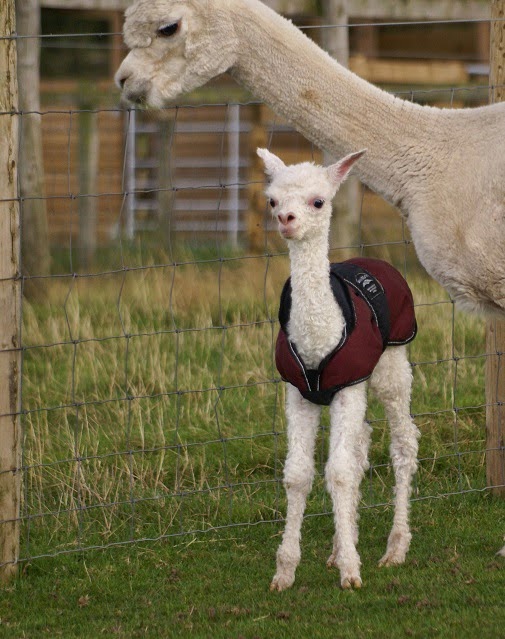 Then this afternoon Garnet (agisted) decided to give birth in the middle of drive-by matings. Amanda was watching the paddock and alerted me to the fact only one leg had presented. So matings over Explorer was left in the pen as I went to investigate. I couldn't find the room to get it turned. So the vet was called. As the vet was some distance away, we were lucky that our neighbour could come round. He eventually eased the cria out with the knee locked back. Good job, with no tearing. The cria (sire: Lavender Park Tulley) was up and drinking within the hour (below) 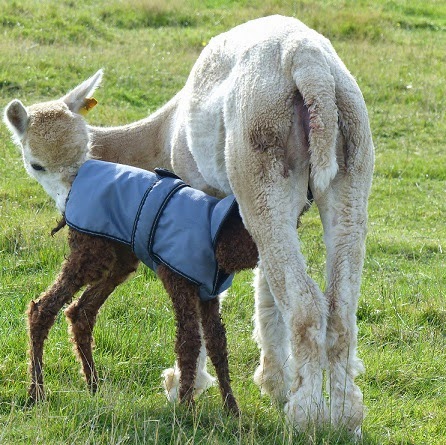 I am rather smitten with Beck Brow Stardust (sire: Ep Cambridge Spartacus) she is such a poppet 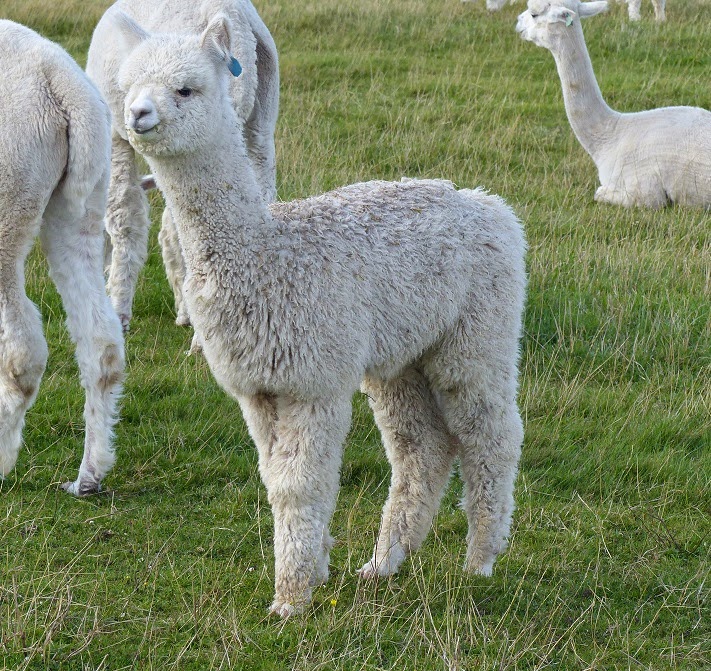 You may have noticed through out this blog, my referring to alpacas on agistement. It has rather got out of hand with 50% of the alpacas on the farm not owned by us. However, after a few delays, one of the herds here will be reducing their numbers, and will be putting most of their herd up for sale. With some top notch Australian genetics...could I resist?...no chance! So having purchased her dam, this little St Patrick female is now ours. Here is Beck Brow Bebop A Lula. This female line is exceptional, thus two of her sisters will also be staying at Beck Brow. The third (2013) female will be for sale pregnant to Goldmine, when I get the time to get her on Alpacaseller . 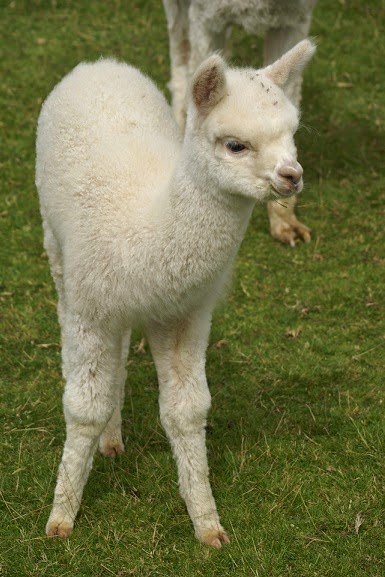