It was a 5am start yesterday as we headed off to the YAG Show. Having missed being able to show all summer (due to me being judge's apprentice) we decided to take along a small show team. As I was ring steward (and would have to leave the ring whilst our alpaca's classes were judged) and we have recently purchased an alpaca from Bozedown Alpacas (the herd belonging to Mary-Jo Smith, who was judging) so would not be able to handle our alpacas in the ring...we limited our entries to two.

You might be thinking at this point...why even bother...I was thinking the same thing myself at 5am...but it was well worth the effort. Beck Brow Foxy Sox (sired by Waradene St Patrick of EPC) was kindly taken into the ring by Jean from Velvet Hall Alpacas. They did a fabulous job taking 1st place and Champion Fawn Female. 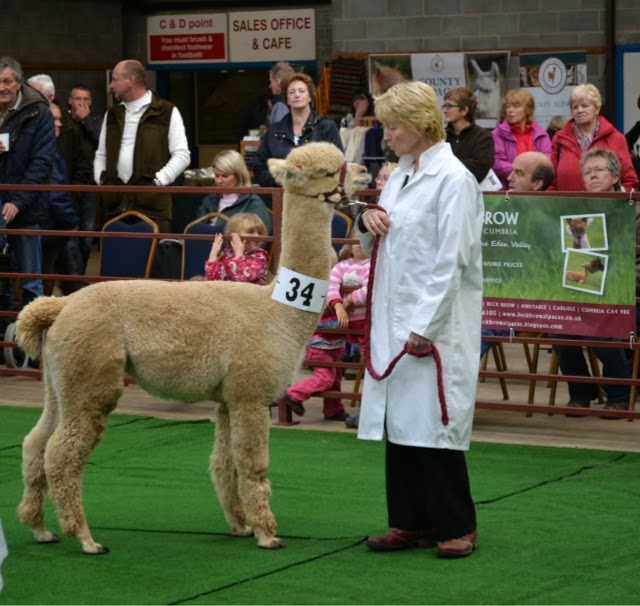 Jean with Beck Brow Foxy Sox (thanks for the photo Stuart)

Our second entry was Waradene St Patrick of EPC who was taken into the ring by Simon from Minster Alpacas (I thought SP might object to having his private parts assessed making him a bit of a handful and I was correct...well held...Simon that is...not Mary-Jo). St. Patrick  also took 1st place and Champion Fawn Male. Having taken both Fawn Championships we were of course more than pleased, but more excitement was to come when St Patrick took Supreme Champion Huacaya!!! 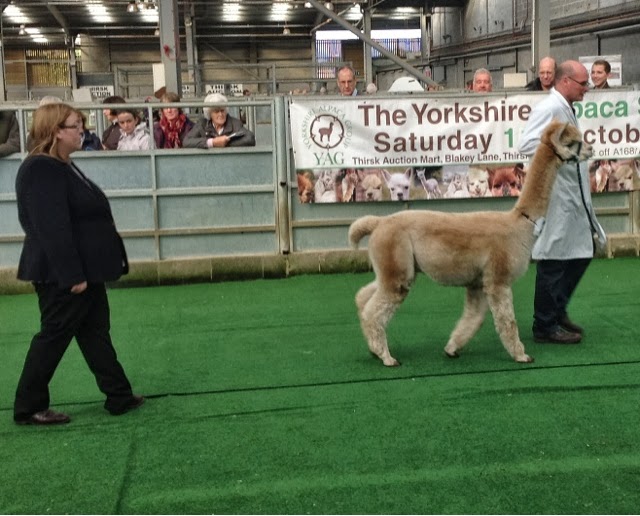 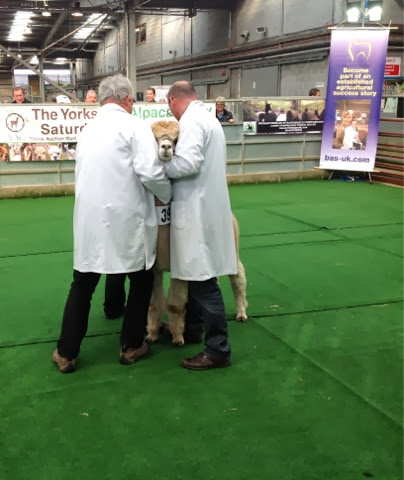 It takes Simon and Michael Henderson (ring stewarding) to hold him whilst Mary-Jo checks behind! 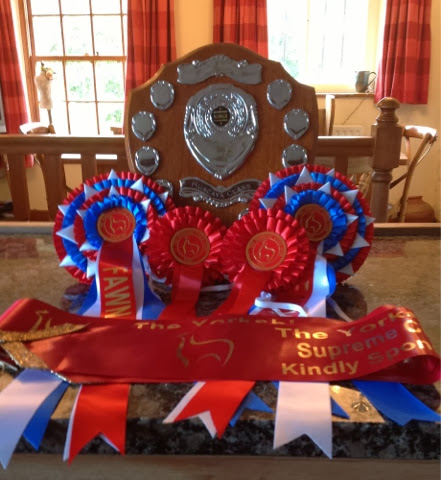 Our stash from two entries at YAG Show

What a fantastic show YAG Show is, they always draw a large crowd and it is so relaxed and fun. The fancy dress was a big hit again (unfortunately I didn't have chance to get any photos) and I learnt lots from Mary-Jo in preparation for my certification. With lots of friends also doing extremely well in the ring it was a great day all round.

It was back to work this morning. The females have all had their dose of Maxigro (selenium, mineral and vitamin drench) and the cria their vitamin A,D and E. Now it's back out to sweep up the mess in the barn. Admittedly things are a little slow due to the glass or two we had to celebrate last night!
Posted by Unknown at 12:49