Things are so busy here at the moment that I never get the time to blog...then by the time I do blog... I have forgotten why I was so busy...so in no particular order...

On Sunday, as forecast, the weather was dreadful. Rain and gale force winds...not a day for birthing...well so we thought. At 7 pm we were out in the livery paddocks getting a female in for mating...when Paul happened to notice a crowd gathered in our female paddock...he wandered off, then come running back "get the birthing box Adelle has a head presenting"...the rain was coming down in sheets and the wind was so strong the contents of the birthing box took off around the paddock...it was a bit of a struggle but by 7.30 pm we had a cria on the ground...on its own...Adelle had ran off into the barn out of the rain!

Being a maiden, Adelle didn't quite know what to make of her cria when reunited...we shut them in together overnight and she obviously recognised him as hers...but he wasn't looking to feed and she wasn't encouraging him. Not wanting to take any chances with an evening birth, we bottle fed cow's colostrum. On Monday I left long periods between feeds in the hope that the little fellow would nurse...but no...and when we tried to help, she sat on his head....not looking good. Surely not another bottle feeder for the last born of the year (Foxy Sox last year)...then bingo...at 12.30 pm yesterday...just as I say to Amanda that I am going to get a bottle...he latches on...yipeeeeeeee 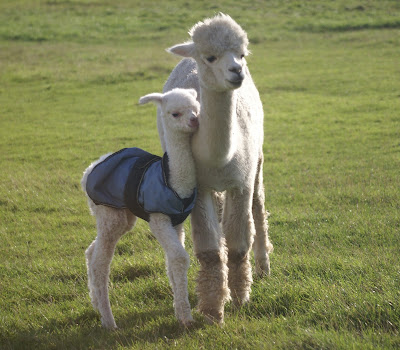 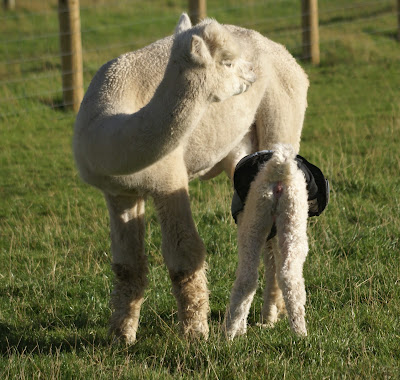 What a wonderful sight (yes, he might need an enema!)

That's it for Beck Brow...13 boys and 9 girls was the final score...better than half time! Beck Brow Explorer has had 3 boys and 3 girls. They are so like him it is comical. They all do the same grumble when you catch them, and are all so laid back like him, and of course they all look like him. 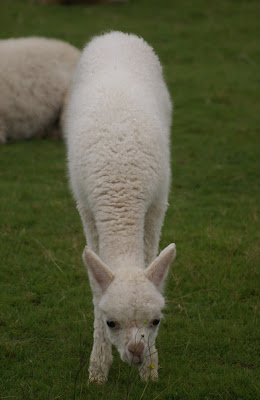 Vircocha Black Sabbath has also produced cria all with a very similar look...and particularly the head type. Beck Brow Sunday Best is his stand out cria...but we are very pleased with his cria in general 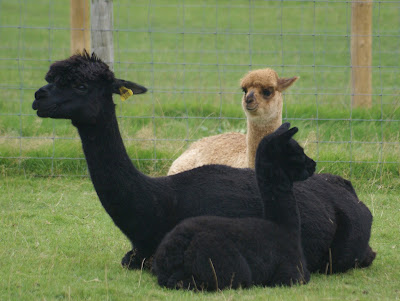 This is another little Black Sabbath cracker...Prima Medici...born here on livery this week 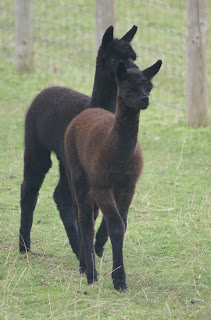 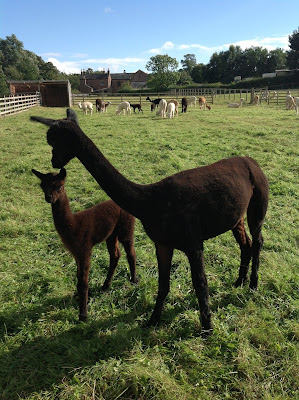 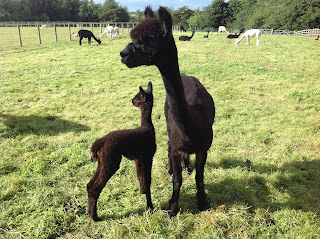 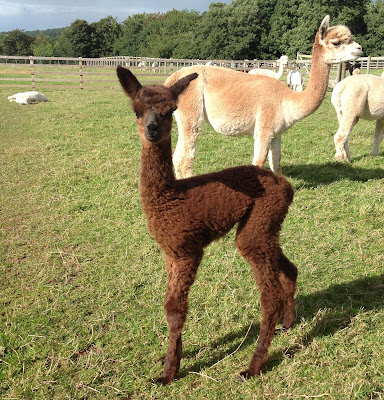 Born today in the livery paddock a brown Prophecy male.

Yes, I have been a busy midwife in the livery paddocks this week. I seem to have been on my knees all week...towelling off cria and spraying umbilical cords...whilst supervising matings (if you don't own alpacas then dont even think about why I am on my knees during the initial stages of mating!). Yesterday we actually had a mating going on at the same time as a female was birthing in the same shelter...Amanda and I just looked at each other and started laughing...what a way to earn a living!

On the same subject...why have 50% of the livery females chosen to come into the brick build shelter to give birth...of their own accord...and in good weather? I feed them in there, could this be the reason? Ours always choose to birth outside. Sonata came in for breakfast yesterday and just birthed in there 30 minutes later! All credit to them, they do just get on with it. No high maintenance females on livery...Beck Brow girls?...ummm! 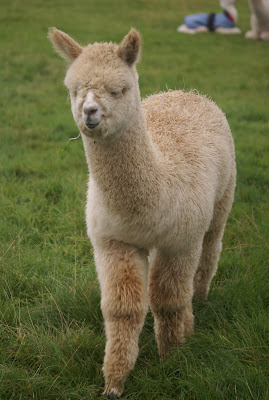 On Thursday I was apprentice judge at Westmorland Show, under Tim Hey. He was a great tutor for my last halter show apprenticeship. I have the HOE fleece show to go, before my certification exams next month. I am so looking forward to showing our alpacas next year. I seem to have been ring steward or apprentice at every show this year.

I had a good catch up with Debbie from Barnacre Alpacas today. She brought over Sunburst (their Champion grey male) for a date with Zola, who is on livery (remember mad Zola who has now decided to be nice) and Barnacre Sahara for a date with St. Patrick. It took Debbie about three hours to escape, as I showed her all the livery cria as well as our own!

Only one more birth to go now on the livery side...a lovely black female who is pregnant to Black Sabbath. Hopefully, this week, as we have a busy weekend lined up. Big excitement Saturday...we are going to Bozedown Alpacas to chose our Alpaca Classic female...Yes, lot 25 is the pick from all the 2012 born females at Bozedown...87 Huacayas to choose from...I have narrowed it down to seven on paper...but shall be looking at many more to be sure!
Posted by Unknown at 17:53