Assessment...definitely some ginger in there!

Well so far this week I have managed to avoid the M6...actually that's not 100% true I did travel on it for one mile on Monday...but that doesn't even register as travel after my previous couple of weeks!

We have been lucky enough to avoid any heavy snow here, but we haven't had to travel far to find some. On Monday Amanda and I set off on the 35 minute journey to High Winder Alpacas in order to provide some husbandry support (Lambivac, toenails, selenium). Richard had warned us that he had spent two days digging himself out...but this obviously hadn't really sank in as I chose to take the back road to the farm...the back road that is very narrow and very winding...a very slippy, snowy, back road...a back road that I had to reverse all the way back down when we ended up in a four foot snow drift...phew it was a relief to get back to the main road in one piece.

Tuesday was a day of visitors. First to arrive were Derek, Tracey and Diana who own Willow and Coco; closely followed by Carole from Prince Bishop Alpacas. Wiseman Sweet Coco is going to be shown by Derek at the NWAG Alpaca Championships next week; so we we decided some training on show etiquette and how to present Coco well in the ring would be useful. She has turned into rather a little sweetie since weaning and behaved like a little star. She will probably just show her own teeth to the judge...say cheese!

Amanda was last to arrive, armed with freshly made soup. The plan had been to go through some alpaca assessment training...but I don't know if it was the cold weather...or the chatter was too good...but we spent more time assessing the ingredients that had gone into the soup than we did any alpacas...next week!

Lots going on with final details for the show. We keep telling ourselves that next year will be easier; a new show, in a new venue, we are trying to factor in every eventuality, but it will no doubt bring up something that we haven't considered. The rosettes and sashes have arrived (tick) the catalogues should also have arrived yesterday (no tick). I am promised that they will be posted on Tuesday...getting neat...will there be stress!

After being away rather a lot of late, it has been lovely to spend time with my own alpacas. I just love watching all their interactions. Lady Gaga had me most amused yesterday...actually she has me amused most days; as she really does think herself a cut above everyone else. She goes about everything in the most regal manner...she could carry off a tiara no problem. Well yesterday I could see that she had her eye on particular food tub...it didnt matter that all of the troughs round her had feed in...she wanted the bowl that I had set down. The trouble was that Bonita had got there first....now Gaga doesn't get into fights...spitting and such behaviour is so beneath her. So I watched to see how this was going to be resolved....and all of a sudden we had Gaga the prancing pony...one front foot then the other front foot elegantly placed up in the air and back down...then quick as a flash a front foot slipped into the bowl... which was then very nimbly pulled in front of her...voila Gaga has the feed bowl...love her!

All the girls are looking decidedly pregnant now. Normally at this time of the year we have some is she/ isn't she debates...which tends to mean that they are not...but so far all seems to be going to plan ( we have some due in September so a bit early to be sure about those. We will be spitting some off shortly). I am starting to get very excited...we are anticipating that this will be our best crop of cria so far...the result of lots and lots of research and planning...with lots more planning ahead.

However, no matter how much planning goes into our breeding programe we will always end up with some surprises. Take Inca Van Dieman Chaska for example: a beautiful female with an advanced dense fleece and a phenotype many a macho would be proud of...she is also a fawn, a factor in her purchase...so far she has produced two white males from two fawn sires! Not to be beaten...for we are sure she is going to produce something special and coloured if we can just get her match right...she was mated to the very impressive Lillyfield Jack of Spades of Inca... who is black and has density in bucket loads...this has the potential to be exciting...anyone want to put some odds on the colour... 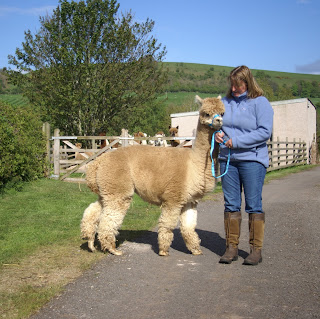 archive photo of Chaska...mated to Jack of Spades (black)...what colour will the cria be?

One of my plans for the Easter weekend is to start on a data base for recording our EBV's (estimated breeding values). This is something that we have been planning since our herd assessment with Jim Watts and Tim Hey (SRS breeding), and after listening to Brett Kaysen at the Alpaca Classic at Bozedown Alpacas last year. The key, I guess, is not just about collecting data (which we already do) but collecting the right data and processing this into useful information, which has impact on breeding decisions. See what happens when you become a trainee judge..you get even more obsessed with assessment!

Actually looking out of the window, the sun is trying to shine, maybe inside jobs will have to wait. I even did some poovering last week I was so deperate for some outdoors time. It is going to be a strange weekend saying goodby to two groups of our weanling boys. On Saturday Jean and Stuart will be taking Bendrago and Marco off to snowy Scotland (weather permitting) and on Sunday we will be delivering Dougal and Hamish to Bev and Andy' s in equally snowy Yorkshire (again weather permitting). We are okay here in sunny Cumbria...not often we can say that!
Posted by Unknown at 08:06