The dreaded day arrived this week...the day that makes a day of toe nail trimming seem like fun...yes, Wednesday was weaning day. This year we decided to put the weanlings out of sight of their dams (with such muddy paddocks we didn't want any injuries from cria racing up and down fence lines) which meant the manoeuvre was rather more complicated than just moving them a couple of paddocks along. No worries, I had plenty of help with Carole (who is starting her own herd), Amanda, Robyn, Ben, some water pipes, and plenty of hurdles.

The weanlings over 30kgs and ready to go were: Coco; Lula; Lexus; Bendrago; Hamish (aka Pedro) and Shackleton. We also moved Crystal, Finesse and Sophie in with them (as they will be going as a group to a new home nearer Christmas, we thought that it would be good for them to bond). We also moved Lullaby and Sox. Obviously Sox isn't over 30kgs but as she is totally bottle fed we decided to move her in with the weanlings, where she will have less competition for the feed (although she fights her corner as good as anyone and was first in to check out the shelter in the new paddock). So far not too much whining, so maybe out of sight and with aunties is a good plan.

I have borrowed Amanda's camera (to take some product photos) and I left Paul with instructions to take a few photos for the blog today...very unexciting I am afraid... 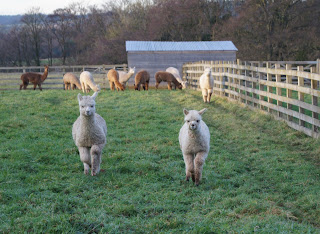 Lullaby and Sox in the weanling paddock (honestly this was one of the better photos!) 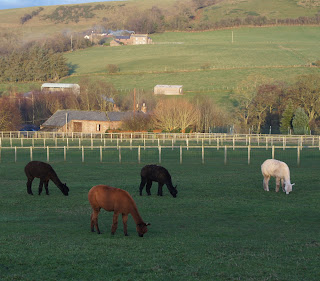 Photos can be deceiving...we do have lots of muddy alpacas...just none in front of the camera.

Today I have been to the County Living Christmas Fair at Harrogate, with Bev...I know... I am going to be the Christmas fair expert...what did I purchase this time...three pairs of alpaca socks (talk about coals to Newcastle. I nearly bought a pashmina but decided that Paul would go mad!), two pairs of earrings, a whisk, an oil diffuser, and a Christmas pudding! Paul is making up gift boxes for our next Christmas fair at Hawkes Head at the weekend...surely I wont find anything else to buy whilst I am there!
Posted by Unknown at 18:13