It's been a big weekend here...well a big birthday to be precise.... as Paul celebrated his 50th birthday on Saturday. We spent the evening with family at Sharrow Bay Hotel on Lake Ullswater. The 10 course tasting menu, with wine to accompany each course, ensured that we had a jolly time!

This didn't stop us fitting in some work around the celebrations; on Saturday morning Explorer had a mobile mating booked in. I expect this will be his last mating of the year as time is passing on (although he does already have a number of bookings for next year). We made the decision to not go past the end of September with our own matings, hence it was with fingers crossed that we spat off Metisha on Sunday. Metisha was left empty last winter and had become a little chunky...well not a little...she really is a Fatso! Consequently getting her pregnant has been troublesome...we have been trying since April...she ovulates....then sits again...we have tried with Explorer....we have tried with St Patrick...but no. So this pregnancy spit off to Explorer really was the last chance saloon. YES...at last...phew! 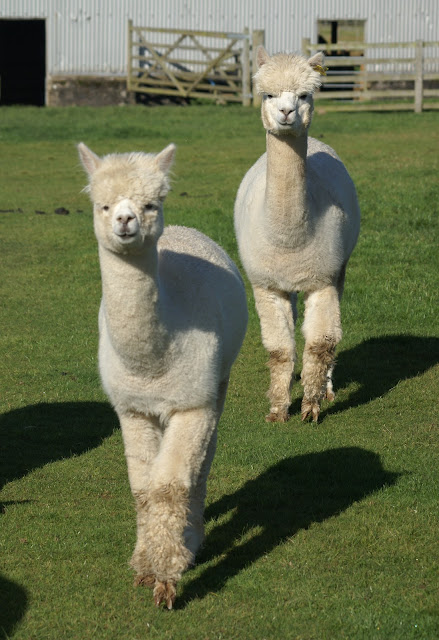 Fat Lass Metisha behind her daughter Adelle...how did she get so lardy on restricted pasture? 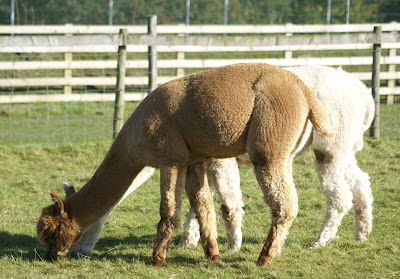 Maybe she should try sharing the same blade of grass as Sophie and Blanche are doing.


With unusually good weather for October...actually for any month this year in Cumbria...we decided to get some promotional photos of Beck Brow Explorer, post his latest Supreme Championship win at Westmorland. We know from experience that Explorer does not do 'wearing a sash'. So the best we could hope for was one sash on his back and the rest displayed. Ninety eight photos were taken...this is the best one...yes, I know...stupid boy! 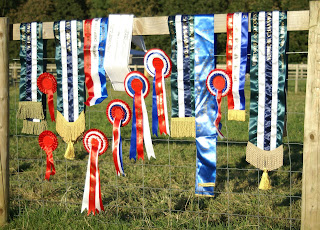 Some of Beck Brow Explorer's stash...but no Explorer!

In the last blog I mentioned that I needed to consider making some Beck Brow females available for sale...always a tough decision. Having recently witnessed the auction at the Alpaca Classic at Bozedown Alpacas, where prices averaged 8000gs, it was obvious that the demand for top quality alpacas is strong. I believe that what  made that auction special, was that the breeders were prepared to release some of their seed stock (top) alpacas for sale.

So, I made the decision; so long as I still owned the dam/ daughter or sister, then we would be willing to release any of the girls ( there were two exceptions - Cambridge Camilla and daughter Beck Brow Rumour Has It and EP Cambridge Lady Gaga and her daughter Beck Brow Snooty Boots, as I wish to expand these two lines, but will be releasing their progeny). This has meant that we have sold some of our top females who are pregnant to both Beck Brow Explorer and Waradene St Patrick. I am sure we will be meeting these alpacas in the show ring...and I will be as excited as their new owners. With seven females sold in the last couple of weeks I am afraid we are now unable to release any more females until next year...and we now have a depleted show team for 2013!