The decision to put the female weanlings back in with their mothers; was based on nothing other than the fact that I like to see mums and daughters together, and to watch how they interact. Bahati and Poppet (born 2010) are especially close and are like peas in a pod. 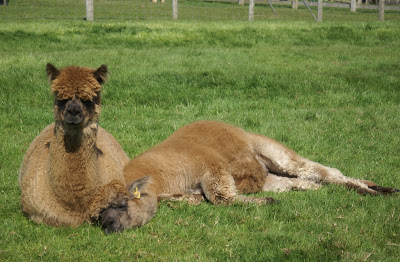 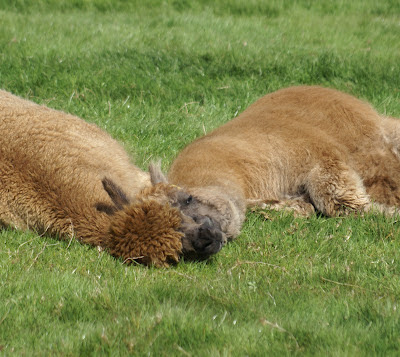 Bahati and Poppet asleep in the sunshine.

Paul likes to remind me that most of my decisions are made with emotion as the decider rather than common sense. Hence he wasn't best pleased to see the situation below: 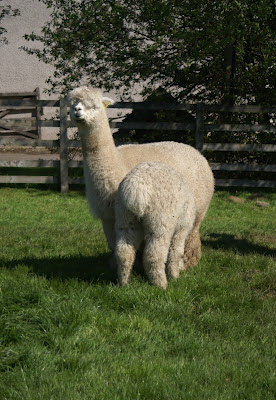 Yes, despite being weaned since February, that is Adelle trying to suckle, and Metisha allowing it. In fact I heard Metisha clucking Adelle over and then saw her pushing her under. All the other mums are delighted to have their daughters back but won't let them anywhere near their udders. The exception is Camilla, who just can't be bothered with poor little Rumour at all. However Lady Gaga appears to have adopted her as a sister for Boots. Don't you just love Gaga.

Along with the rest of the country we are enjoying glorious sunshine. The alpacas are loving lying out. As well as paddling in the water troughs! Although, by 1pm each day...a look in the paddock and you would think that we didn't own a coloured alpaca...we have a field of white...as all of the darker girls take shade in the barn for an hour or so. I had hoped that we would be getting the shearer this week, but I think that the warm weather isn't in our favour (as we have indoor facilities we can be shorn whatever the weather). It will be good to get the herd all naked and looking the same. We have bought six new girls this year and some are sporting shearing styles quite different to ours: 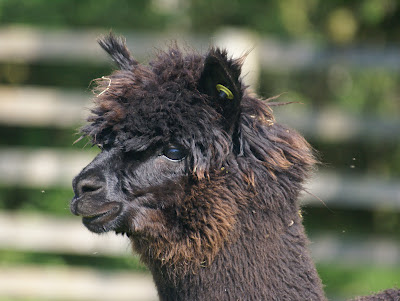 April...in need of a hair cut! 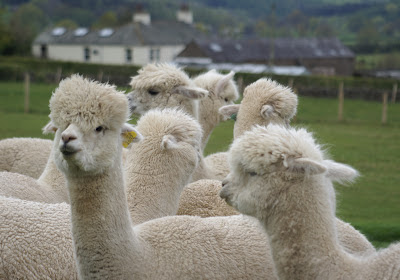 "It's all white this sunshine!" 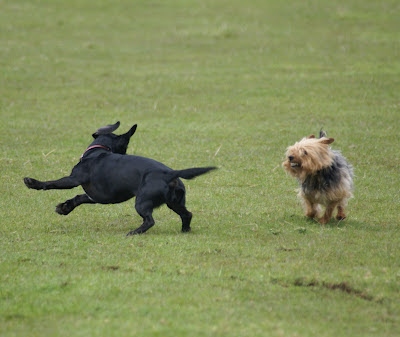 Tyke and Velvet enjoying the sunshine...I don't think that a miniature Yorkie baring his teeth is going to frighten off Velvet 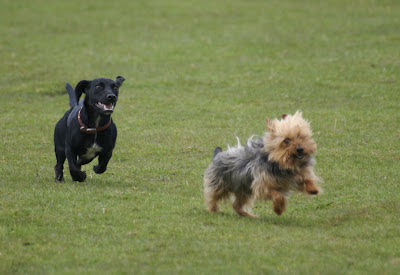 We decided to weigh the weanlings at the weekend...it is always difficult to guess their weights...but we were in for a surprise. Crystal who is 11 months old weighed in at 66.5 kilos! Putting that into perspective Explorer weighs 70 kilos (and he is no light weight) and Adelle weighed 37 kilos.I think that she will definitely be getting a date with Explorer later in the summer. Having left the scales switched on and alpacas being as nosy as they are; a few of the adult girls decided to weigh themselves as well. Lady Gaga weighed 74 kilos...and Pepsi...wait for it...106 kilos... lets hope that she is pregnant!!

A new shearing pin was acquired and Paul has been out 'playing' with his new paddock sweeper again. He came in talking about needing a slightly longer skirt...now as Paul does not follow fashion...I assume that this is a modification he will be making to the sweeper! It is going to save us lots of time, but paddocks are going to have to be kept well topped (two inches max) and well rolled (luckily are paddocks are pretty flat).