Last night we had the pleasure of having Tim Hey (owner of Inca Alpacas and well respected BAS judge) and Dr Jim Watts (a veterinarian from New South Wales who has developed a new way of breeding fleece coated animals; the SRS system) stay over in preparation for our herd assessment this morning. Although we had planned an early start (06.30 hrs) I was awake by 5am anxious to hear their opinions.

The SRS system is about;

Our alpacas were assessed systematically and scored accordingly. Fleece length was measured and skin biopsies taken from selected males (the skin biopsy gives a primary to secondary fibre ratio and also measures density). Jim and Tim gave feedback as we went through the herd, but we will receive a structured report with recommendations. It was an incredibly useful experience, and an impartial herd assessment has given us a much clearer vision.

There were no major surprises in that the 15 females that we had selected as our best, all fared well (these were the only females tested). However we can now be more specific in what qualities we want to breed into, or preserve, in each individual. One of our top rated females was Blueberry Samurai Bahati, who at 8 years of age still has a fabulous fleece. Her daughter Poppet (Beck Brow Paige Turner) also scored very well. Someone that we had maybe slightly underrated was Morden Hall Honaria, and her daughter Beck Brow Crystal Maze who were both highly praised. Silverstream Galaxy ET was declared as exotic; with her fleece described as 'better than any cashmere', but we do need to add some length to it. Inca Van Dieman Chaska was also scored as top class by Jim (luckily...as she was bred by Tim's parents!) I won't name all of the others as they performed as expected. It was a great relief to be given a definite thumbs up regarding our breeding decisions and our approach to genetic improvement.

However there was undoubtedly a star of the show....yes you guessed...Beck Brow Explorer...we knew his fleece was long but it proved to be exceptionally so. The smile that appeared on Jim's face when he opened his fleece just said it all. Whilst on one hand I was so proud of him...on the other I realised that he wasn't going to be best please that we were going to have to take a skin biopsy...but amazingly no pouffing. Waradene St Patrick of EPC also scored very well and he was judged to have great density...thus he also had a skin biopsy taken.

All very exciting and we look forward to getting the formal results. Jim is now on a plane to Italy...talk about a non-stop schedule...but the demand for information on improving alpaca fleece traits is never ending! 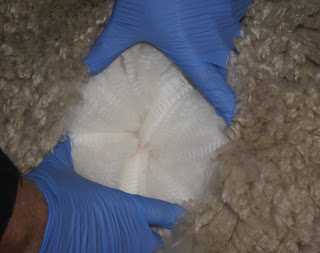 Beck Brow Explorer ready for his biopsy...not a great fleece shot but you can see the brightness.

It has been great to consolidate the Stage 1 Judges Training Course (I have passed with recommendations to proceed to stage 2 if I wish to do so), the World Alpaca Conference, and today's herd assessment. I was especially pleased that I had identified the correct strenghts and weaknesses. I am now even more excited about our future breeding decisions...maybe a three year plan for now!﻿ Density...density...density seems to be a good goal!

Apologies...this blog may be a little lacking in modesty...usual service will resume next time!
Posted by Unknown at 13:56