The plans were in place; it was Saturday morning...and despite Amanda's best efforts at praying for the predicted snow...the roads were clear...so it was a ten minute trip down the road to pick up little Satchmo. Satchmo is back with us for a month, before him and Magnum head off to their new home in Scotland.

He arrived back looking every bit like he had never been away...although someone is going to have to break it to him...by the way he rushed over to greet the females...he really hasn't grasped the meaning of the word wether 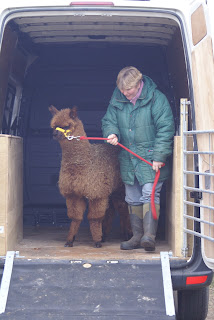 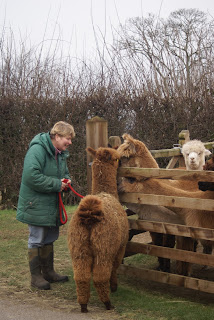 Rushing over to greet the girls (although the tail is flipped; he knows who's boss!) 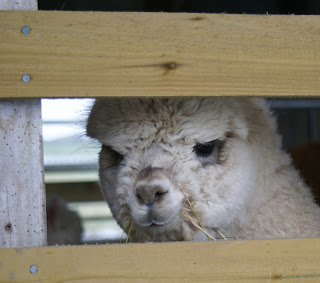 Snooty Boots takes a peek
By lunchtime the snow had arrived, but we have had nothing like the amount ﻿seen in the South, or indeed what we had here last year. However, we did have one collision...too much speed and not enough control in the snow...and as is usually the case, the little guy suffered the consequences.... 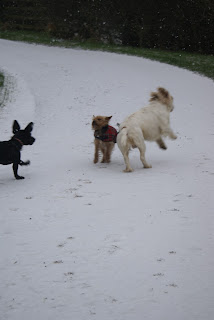 Oscar loses his grip and smashes into Tyke (he actually ended up rolling twice and ending up on his roof...was he mad or what!)
I made the silly mistake last week of mentioning that we had hardly seen the vet all winter﻿...well we definitely saw plenty of him Saturday night and Sunday morning...when Rosie one of miniature ponies went down with colic...it was touch and go when we though she may have twisted her gut...but she is perfectly okay again now...phew...remind me to keep my mouth shut in future! On the health front Bahati appears much improved...although she is less than impressed that the barn heater has now been switched off.
Paul has been doing quite a bit of twittering over the weekend...he did the same last weekend ...note the small 't' this is not Twittering...it does consist of word limited announcements...but they are verbal...and I am the only recipient.  It goes something like this:
"There must be something wrong with your head" (now, I know this doesn't sound very nice, but the advantage of verbal communication is that I think I detect a small smile...could be a smirk...not sure)
"Learn to just relax...read a book or something" (I think he has guessed... it is getting near 8pm on Sunday night and I keep popping in to the study...he is on to me)
"Look you are bored...you better not be doing what I think you are"
"Right" (not so smiley)
"How many stud males do you have?" (answer 6)
"How many breeding age females do you have? (answer 20)
He is right of course I must stop bidding at the British Alpaca Futurity stud services auction , but have you seen the amazing deals. Difficult for me to justify with the choice of top quality males that we have at home, but I have been placing a few bids...after all you can't have too many top class genetics! We will be using at least one outside stud service this year...that will be for Cambridge Camilla (dam of Explorer and Rumour)...but we have already ear marked our male of choice (as Camilla is proving to be a star we have decided to mate her with an elite white this year, and we only have her son as a white stud at present)
Posted by Unknown at 14:55