Excuse me whilst I sneeze...

I have been reminiscing this week...back to when my brother and I used to get a bath on a Sunday night...every Sunday without fail, ready for school on Monday... (it used to alternate as to who got the water first hand)...we lived on a farm so weekend activities could be a bit mucky...hence post bath time...we had our ears checked...just to make sure that we had done a good job.
Well I would have failed inspection on numerous occasions this week...I have been fleece sorting like a women possessed...I don't think I have had so much dust in so﻿ many crevices... hundreds of beautiful whites fleeces have passed through my hands...is it just me or do some fleeces feel cool to touch...you just know that they are going to produce the loveliest end products. Hence, I am now getting organised to get the fleece to the spinners in Yorkshire in January...there, I now have a target!
Talking of things possessed...Holly lost her head completely yesterday...the alarm call could be heard ringing through the valley...neighbours (and they are not close) were concerned...not only was she putting out some decibels, she was running around like a headless chicken. I ran out of the barn...leaving a trail of dust behind me...to find...a stray cat...not much more than a kitten...unfortunately it ran off before I could make another addition to the family.
Velvet, who is not supposed to be out unattended since the fungi incident, has been in trouble for running away (not with her bags packed or anything...she is not unhappy...she just likes to play in the wood). Yesterday I decided I would let her play in the garden whilst I was skirting fleece in the adjoining barn. I left Tyke, the Minature Yorkie, in charge...he is a bit of a snitch...he always starts yapping when she is doing something naughty...I kept looking out and she was still there...."good girl Velvet"...she likes praise...then the yapping..."where's Velvet?" I ask Tyke...he looks up...on the roof of the house!!!...I kid you not...She had climbed on a garden table, then jumped onto a wall, then on to the roof of a lean to, then on to the house roof ...(well that is how she came down!)... At least she is never boring.
Boots continues to do well despite efforts to knock her down to size: 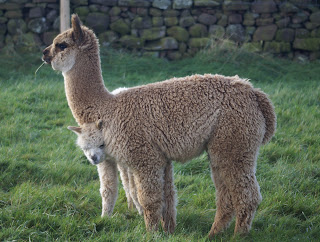 Finesse keeping Boots out of the picture
And finally, someone who doesn't get his photo featured very often; Beck Brow Magnum. He is a lovely little fawn male who is never far from Young Punk Alfie. He is our only male from this year's cria who will be sold as a pet...  Magellan, Synergy and Quintos will be kept as potential stud males (early days)...maybe I should just keep him as well?...he is no bother Paul! ﻿ 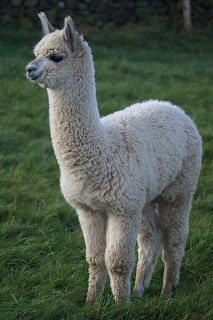