I was going to wait until I had some interesting news before blogging this week...I was waiting for something exciting to report...something like our last cria of the year being born...or a miracle occurring such as the fleece fairy paying us a visit, waving her magic wand and woosh; 600 fleeces sorted...but no and no!﻿
In amongst fleece sorting, I have been nipping between checking on Hoity Toity (over due) and keeping an eye on Westmorland Show entries. With limited room available in the tent (allowing for 3 mtrs between pens and room for an indoor ring in case of rain, it is going to be tight). I limited the numbers, but it was always going to be difficult to imagine every variable e.g male/female/adult male all needing separate pens. Any way entries are closed and we are packed (I feel a headache ahead)...Paul!!...We have entries from 22 different breeders which is great but sets a challenge for penning...just the task for an engineer I feel!
The cria have been in a boisterous mood today. Firstly Satchmo decided to mess with Magellan: 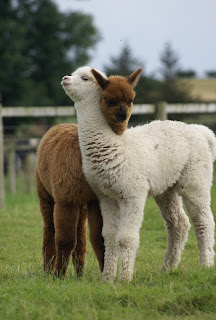 Satchmo (brown) and Magellan
However he was always going to come worst off...Magellan is one strong male:﻿ 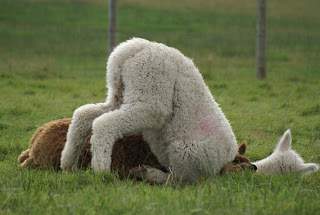 Satchmo is counted out...
Next it was the turn of Synergy who got an ear full (or is that an eye full) from Sophie. ﻿ 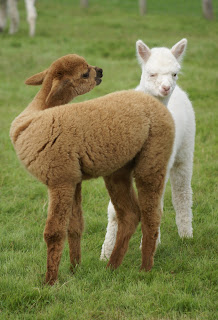 Sophie and Synergy
Not very lady like? Depends if one would like to keep one's dignity intact...the reason for the fall out shown below:﻿ 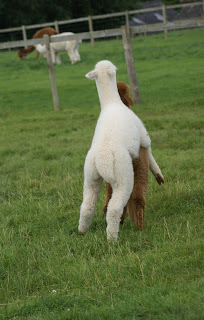 Synergy starting early
Although I was only out with the camera for 15 minutes Magellan managed to get into more trouble annoying Finesse:﻿ 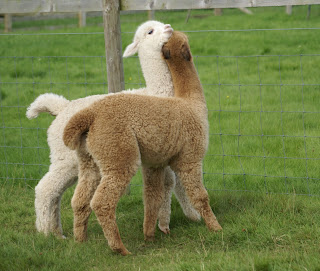 Magellan and Finesse
Explorer still spends all his time at the fence next to the girls. He still hasn't given up hope of being reunited with his true love (Lucie). Here he is trying to remove the staples with his teeth...it is going to take a while to get the fence all down Explorer!﻿ 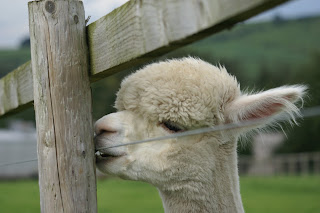 Explorer...pliers would be quicker!
Boots was a week old on Tuesday. She still looks tiny but is full of mischief and frightened of nothing. Poor Lady Gaga is forever running around behind her.﻿ 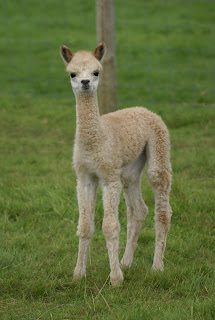 Snooty Boots.
Posted by Unknown at 18:31