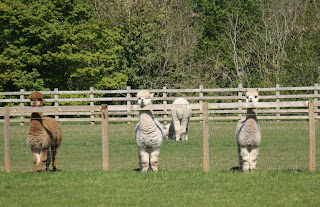 Don't we look tempting?
However, Saturday saw Waradene St. Patrick get a change of scenery. It was the first trip out for the alpaca-mobile (aka a white van) and for St. Patrick, as we headed off to see Jenny and Graham at Fowberry Alpacas in Yorkshire. How were they going to perform?
I decided to do the driving and found it much easier than towing the trailer. The strange thing is being able to hear everything in the back. I kept shouting "are you okay in there Pat" and "just a bit of slow traffic here won't be long 'til we're there"... and Paul just kept shaking his head﻿ (but he isn't one for too much conversation). We were concerned as to whether the 2 roof vents and the window were going to keep the van cool enough. The conclusion?...fine for mobile mating...but his fleece was a little damp, so probably not cool enough for the show team to travel...so some fans are now on order (Paul has a plan to blow cool air through from the cab...that is all I know)
We also had no idea how St. Pat would perform, as we are still keeping our girls waiting (tempting as it is to do otherwise) Jenny and Graham have some fabulous females so he was certainly having a very nice start to the season. We were pleased to see that he was quite the gentleman and was his usual chilled self. Fingers crossed that the 2 females will now be pregnant (even though I am going to be so envious next year when I am still waiting!)
Although St. Pat had a good day out; Mrs Patrick (aka EP Cambridge Lady Gaga) was not impressed when he returned. Are our royal couple about to have a fall out so soon in their marriage? 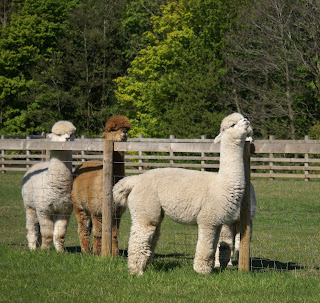 EP Cambridge Lady Gaga is unimpressed by her husband's straying ways!
We have all been enjoying the great weather and the generous amount of bank holidays. Paul has been off from work for 11 days now, a rare treat as we normally use all his annual leave up going away from home (3 days annual leave = 11 days off!). It has﻿ meant that we have caught up on lots of jobs and had a little bit of leisure time too! 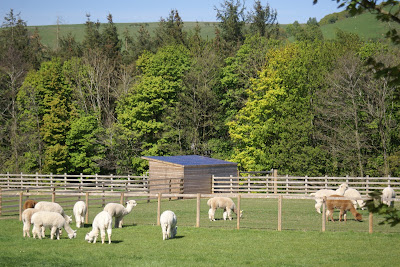 Everyone relaxed and enjoying the weather 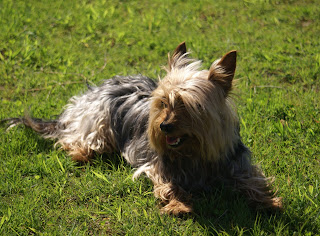 Tyke doing a little sunbathing...haircut booked in for next week !
Paul took the next photo of Craig, Robyn and myself assessing Parisien's fleece, after a bit of halter training for Nutmeg and Poppet. I think the purpose of the photo is to show off the cementing that the boys have been doing﻿. Yes, a perfect finish this time; not too smooth, so it keeps them toe nails down and isn't too slippy 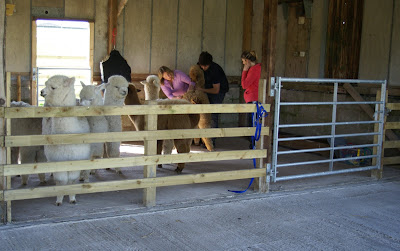 The latest batch of cementing completed...with a few Tyke paw prints for decoration!﻿
Posted by Unknown at 09:50